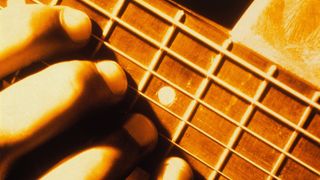 As a guitarist, you’ve heard countless players claim that’s where their tone comes from. While that is hardly research-based evidence that one could bet the farm on, what is a fact is that if you don’t take care of your hands, you may not be able to play at all.

As a 16-year-old, I spent countless hours practicing my guitar. I played until my hands hurt so much that it was impossible to even think about strumming another chord. Like most young people, I assumed that nothing would ever prevent me from being able to continue such a practice regimen. I was wrong.

One day, I noticed that the pain I experienced while I was playing didn’t go away a few hours later. Or a day later. Not even a week changed things. It hurt to even hold my blue Les Paul Studio. I tried switching to a guitar with a slimmer neck, but it was too late. My fretting hand hurt and it hurt a lot. I sought out the help of a doctor, who referred me to a hand specialist. At the time, I didn’t even know hand specialists existed. I was given a series of exercises to do to strengthen my hand, stretches to complete after playing my guitar, and attended twice a week therapy sessions to “fix” what I had done to my hand. I stopped playing for a year and a half because of my hand/wrist problem, and I was devastated.

Vicki Hawkins, registered physiotherapist and member of the Performing Arts Medicine Association, works out of the renowned Al & Malka Green Artists’ Health Centre (part of the University Health Network) in Toronto, Ontario, Canada and says, “Injuries that we often see at the Artists’ Health Centre for guitarists include overuse injuries for the wrist and hand, as well as shoulder and neck strain secondary to poor posture.”

Anyone who has ever slung a Les Paul over their shoulder and played a two hour gig can easily understand what she means. The more important question is: How do you prevent this from happening to you?

“Warm up prior to playing is very important” says Hawkins. It should include “three to five minutes of moderate cardiovascular activity, such as stairs or a fast-paced walk around the room. This should be followed by some large movements of the larger joints - shoulder and elbow - then smaller movements of the wrists and digits.” This may come as a surprise to most guitarists, but when you consider the fact that increased cardiovascular activity results in increased bloodflow to your muscles, it starts to make sense.

Only after the routine above should you commence your guitar-specific warm-up, which can include things such as scales or whatever other musical exercises that you usually do to “warm up”. Hawkins is clear on the fact that this entire process should not be rushed: “the whole process may take up to ten minutes.”

Once you’re warmed up and you’re playing, your attention to injury prevention should still be a priority. “It is also very important to take frequent breaks from playing, every 20 to 30 minutes,” says Hawkins. "The break should not be long (one to five minutes) but enough time to get out of the 'guitar position,' says Hawkins. Get a drink of water, do some shoulder circles.”

“Guitarists need to focus on strengthening the shoulder and stabilizer muscles and the core stability muscles in order to support their playing," says Hawkins. "These exercises may need to be completed daily for a period of time in order to build strength.”

Hawkins mentions that no two guitar players are the same, and therefore each individual may need to complete a different set of exercises. If you suspect that your core and shoulder/stabilizer muscles may not be as strong as they should be, seeing a physiotherapist to recommend a personalized set of exercises may be in your best interests. There are several websites that make stretching and strengthening exercises available to their students. Guitar Tricks is one of those sites, and there are many others. Like all medical advice, you should always seek the input of a professional before trying any new exercise routine, even one as relatively harmless as a hand workout.

Remember when your mom used to yell at you to “stand up straight"? She was right. Again. Hawkins stresses that “it is also important to focus on good posture while playing so that the muscles are in the optimal position.” This may mean that having your guitar slung as low as your favorite guitar hero may not be the best idea.

Stretch After You Play

Contrary to popular belief, you aren’t supposed to stretch before you play, but afterwards. Stretching beforehand can actually help lead to injuries. Hawkins elaborates: “Stretching should be completed after playing and should include the wrist flexors and extensors, the intrinsic hand muscles, and the pectoral muscles at the front of the chest. Stretches should be held for at least 20 seconds, and completed every day to be effective.”

Seek Help When You Feel Pain

Pain is a signal that something is not as it should be. “A guitarist should seek medical attention if the pain is sharp, unrelenting, or gets worse instead of better," says Hawkins. "Also, seek medical help if there is any tingling in the extremity [t he fingertips, for example] or a change in sensation."

We often take our bodies for granted when all is working as it should be. It’s not until we’re dealt a blow to our health that we pay attention to what we should be doing. Guitarists everywhere, at any level — amateur or pro, hobbyist or rock star — owe their craft to their hands. Take care of them, and you’ll be setting yourself up for a lifetime of enjoyment with your favorite instrument.