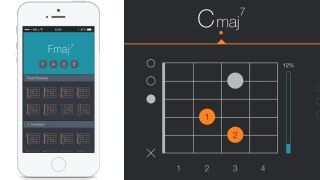 When it comes to guitar-related apps, we’ve seen everything – from tuners and metronomes to amps with multi-effects and multitrack capabilities.

Uberchord, on the other hand, is a chord trainer that automatically recognizes chords it hears through your phone’s mic, and displays the matching diagram onscreen. This alone could be useful in some circumstances, but Uberchord also has a built-in library that lets you see every inversion for the chord, allowing you to build greater fretboard knowledge. According to the site, Uberchord’s chord recognition abilities and database are robust enough to identity “even evil Jazz chords that you’ve never heard of!”

To help you master those chords, Uberchord also includes a trainer that listens as you play and provides instant feedback to your progress. Play the chord wrong and Uberchord will show you which fingers are incorrectly positioned, as demonstrated in the videos below. In addition, the app includes a chord transposer to facilitate playing songs in different keys, as well as a tuner.

Uberchord’s chord-recognition ability suggests it might be able to tell you the chords to your favorite solo acoustic track. While the website makes no claim to this, apparently the app can determine chords produced by things other than guitar: the company’s marketing manager used it to detect her pug’s snoring and learned it snores C6#11/G and Eb (Add #11) /A.

As of this post, Uberchord is in development for iPhone iOS 8 only. The website doesn’t give a release date but says the app is “coming soon.”

For now, you can apply to become a beta tester and get a first-hand look. That’s what I’m going to do. Spots are limited, but if my application is accepted, I’ll be reporting back. Stay tuned.