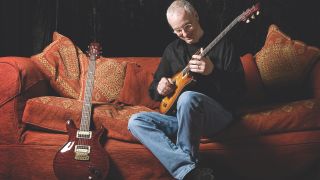 Unlike other legendary luthiers such as Leo Fender and Smith’s longtime collaborator and mentor, Ted McCarty, Smith is a veteran, kickass and, frankly, underrated guitar player (stream the Paul Reed Smith Band on Spotify, etc., for proof), so he makes for a spectacular interview that spans both music and design.

On episode 118 of the No Guitar Is Safe podcast,  which is presented by Blue Microphones, Smith plays guitar, demonstrates the music and approaches that propelled him as a young musician and builder and looks back on how he, 35 years ago, was able to launch a guitar company that has emerged as one of the most respected guitar brands worldwide.

In fact, an argument can be made that the DNA of Smith’s impressive company, which now employs over 350 people, can be traced back to one morning in Smith’s childhood (Christmas, maybe?) when Smith was watching his father struggle to assemble a bicycle.

“I was just four or five years old, but I knew how to put it together,” says Smith. “He had all the parts spread out, and I kept saying, ‘Let me help, let me help.’ He didn’t believe me, and wouldn’t let me help, but I swear to God I had a sense of how to assemble that thing.”

“We spend a lot of time on rhythm,” says Smith of the camp. “There are three important components to playing music - melody, harmony and groove. If you can do those three things together, you can play music.

You can stream episode 118 of No Guitar Is Safe below, or from iTunes, Spotify, Google, or wherever you get your podcasts.