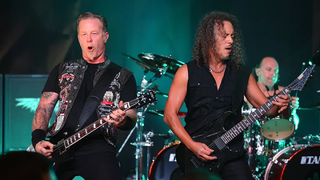 Metallica’s James Hetfield and Kirk Hammett sat down with Jude Gold for Guitar Player’s April 2017 issue. The conversation was heavy on gear, including a discussion about the guitarists’ current touring rigs.

During the interview, Gold asked Hetfield and Hammett, “If I was onstage with you at a soundcheck and you handed me your guitar and said, ‘Here, give it a swing,’ what do you think might surprise me about playing through your rig?”

Hetfield: You’d probably be surprised that there isn’t a giant backline, and that it’s not as loud as you might expect it to be. I have two cabinets and that’s it. A lot of our sound is coming through in-ear monitors, and a lot of it is coming through the Meyer wedges we use on stage. We’re very happy with our monitor sound. A huge wall of amps doesn’t seem necessary to us anymore. We like to be a little more streamlined, so we can show up at a TV show, a radio thing, a stadium, or a club, and things will work the same in every setting.

Hammett: If you picked up any of my guitars, you might be surprised that they’re not super easy to play, because I play with relatively high action. If a guitar’s action is really low, I don’t like it. I need to have some space between the string and the neck. There would probably be less wear and tear on my hands and my fingers if I lowered the action a little, but I like the guitar to fight back—especially because my right-hand attack is so aggressive. I don’t want it to be too smooth and seductive, because my playing style is half caveman, half Lord Byron. My strings aren’t even particularly light. At home and in the studio, when we’re in [A 440] concert pitch, I use Ernie Ball .011s. When I’m on the road, though, and playing for hours and hours each day, I’ll go down to .010s.

What are your go-to stage guitars these days?
Hetfield: It’s mostly ESP guitars for me—all of which have Ernie Ball strings and my EMG Het Set pickups. I’m really loving my ESP Vulture—which has a Flying V type of design that I came up with last year—and also my ESP Snakebyte. I’ve also got a few Gibsons in there—just for diversity. I love the V shape, the Explorer shape, and the traditional Les Paul shape. Those shapes fit my body best, and I love playing them. But that Vulture guitar! It’s nice and light and it’s really lively sounding.

Hammett: We actually have two entire sets of touring guitars and amps. We call one the Black System, and the other the Blue System, and they leapfrog when we’re touring. If, say, the Black system is at a show in London, the blue system might be on its way to Switzerland. On one system, I’ll have my original 1988 ESP KH-2 “Skully” guitar—the very first ESP that I ever got—as the main guitar. The other system features my ESP “Mummy” guitar, which I’ve been playing since the ’90s.

The problem used to be staying consistent with the amp sounds, because one system would usually have a better-sounding amp than the other, and James and I would always know which system sounded better. But we solved that problem when we switched to Fractal Axe-FX processors. Now we have the same guitar sound everywhere—even in rehearsal.

Hetfield: We’re really pleased with Fractal. It’s amazing. For my rig, we went into the studio and put some sounds into it—a combination of my Mesa/Boogie amps mixed in with a little bit of my Diezel sound. The clean sounds are from the Roland JC-120. On stage, Mesa 2:Ninety power amps drive my cabinets, but those cabs aren’t miked at all. They’re only there for my monitoring, for getting feedback, and for just feeling it. The Fractal is going direct to the board.

Hammett: For a while, we didn’t have any cabinets onstage, but that was just too weird. I need to hear something. I need to feel the air being pushed by the speakers for it to sound natural to me. So I have one cabinet on stage for monitoring, and one cabinet in a flight case with a fixed mic on it.

You can read the complete interview right here.