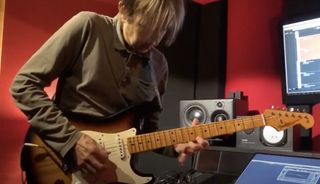 We all know Jimmy Page's solo on Led Zeppelin's "Stairway to Heaven." In fact, if you find yourself reading this, chances are pretty good that you know it note-for-note.

Chances are also fairly high that you've heard plenty of other guitarists - in Guitar Center, or onstage at your local bar, restaurant, etc. - take their own stabs at the high-flying display of compositional virtuosity.

Have you ever wondered, though, what the solo would sound like through the lens of a different, instantly identifiable rock legend? Someone like Eddie Van Halen? Or Eric Johnson?

It's a question that recently consumed Rick Beato. So to answer it, Beato called up a couple of pals - Bon Jovi guitarist Phil X and Johnson himself - to lay down their own versions of the solo.

You can check out the fascinating results in the video below.

Phil X - who knows a thing or two about Eddie Van Halen's tone - offers his EVH-ified take on the solo with a Frankenstrat.

“My approach came from, I was thinking 1981, 1982, after Fair Warning," Phil said. "Less phaser, less gain. I didn’t want it to sound like a quilt of Eddie Van Halen licks. It had to have a flow and everything had to make sense.

Beato himself also offers a Peter Frampton-esque interpretation of the solo, before allowing Johnson to close out the proceedings with an unsurprisingly gorgeous, unmistakably his, version.

Anyone else curious about what a "Johnson Plays Zeppelin" album would sound like now?

For more of Beato's videos, head on over to his YouTube channel.