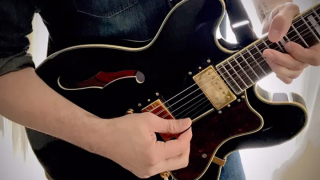 It’s a fact that open strings on the guitar sound considerably livelier and louder than fretted notes, especially ones played high on the neck. Yet many of the chords we use consist entirely of fretted notes.

So, in the interest of fattening up your chords, we’ve designed a lesson full of hip voicings that would be impossible to play with fully fretted shapes. These chords can be used in any context, from rock to prog to funk to free jazz. And not only that—they’ll make other guitarists scratch their heads in wonder about how you’re making those cool sounds.

FIGURE 1, inspired by Yes’s “Starship Trooper,” takes two main grips and moves them around against open strings, resulting in a variety of colors. The first grip (fingered 3-2-1-4, low to high, in bars 1, 3, and 5) makes use of the open G string: it acts as the root of the G chord, the 3rd of the Eb chord, and the 5th of the C chord. The second grip (also 3-2-1-4; bars 2, 4 and 6) allows both the G and D strings to ring open, which pro¬duces some cool add4 voicings and creates a pseudo-12-string effect.

Reminiscent of Jake E. Lee’s intro to Ozzy Osbourne’s “Killer of Giants” (from The Ultimate Sin), FIGURE 2 explores a series of arpeggios in which basic fretted shapes are moved beneath the ringing open E and B strings, resulting in unusual voicings, like the Bbaddb9/#II chord. In addition, the arrangement of notes, from lowest to highest string, is reordered in certain places. For example, in bar 1/beat 3, check out how playing the Cmaj7 arpeggio in a straight ascending pattern requires making a jump from the 4th to the 2nd string before picking the 3rd. Conversely, on beat 4, descending from the 1st to the 4th string consecutively produces tones that are out of order.

Open strings also work well in seemingly non¬-open-string-friendly keys, such as flats. FIGURE 3A is a simple two-bar vamp in Ab minor, with the V chord (Eb) in bar 2. (Note that in bar 1, the E chord [bVI] is used as an enharmonic substi¬tute for Fb.) Using some clever note placement, the same progression is reharmonized in FIGURES 3B–C, with voicings that include open strings. Be sure to arch your fret-hand fingers so that the· open strings ring clearly.

Nonstandard tunings can provide almost lim¬itless open-string possibilities. Using the tun¬ing (low to high) E A D F# B D# (strings 1 and 3 are tuned down a half step), FIGURE 4 demonstrates how open strings can be used to form clusters—chords constructed of major and minor 2nds, such as the D#-E-F# and C#-D#-G voicings starting in beat 2 of the first bar. On beat 5 of both bars, use hybrid picking for crisp articulation of the ring¬ing Em(add9) motives.

Open strings can also be used to create dissonance. Check out FIGURE 5, a chromatically descending series of drop-D (down a half step) power chords. In bar 2, use your thumb to fret the B5/F# chord’s 4th-fret F#. Also note that, for added depth, open strings can be used to double chord tones. Here, the B5/F# chord’s highest note, B, is played simultaneously ¬on the 2nd and 3rd strings.

FIGURE 6 is inspired by the funk/fusion/free¬-improvisation master Wayne Krantz, who often finds colorful ways to sandwich an open string between two fretted notes. Because he tends to place these voicings high on the neck, the open string is often the lowest note of the chord. In the beginning of bar 2, some extra color is added via the 14th-fret A, played on the previously open G string. Because that note is ringing inside an Eb chord, it produces a beautiful dissonance.