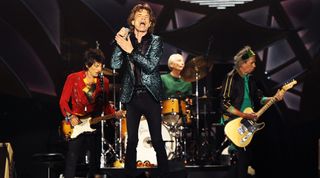 The Rolling Stones have premiered a new song, "Living In A Ghost Town." The all-too-timely track is the band's first new, original song since 2012.

"Living In A Ghost Town" is said to date back over a year, with the band recently deciding to revisit, update and flesh out the track, given its themes and their correlation with our current reality.

You can check out the song's eerie music video below.

"It wasn't written for now but it was written about being in a place which was full of life. And then now there's all bereft of life, so to speak," Mick Jagger told Zane Lowe on Apple Music.

"And when I went back to what I'd written originally lyrically, it was all full of, well I didn't use them in the lyrics, it was all full of plague terms and things like that. I never actually used that, but it was all there. It was very close to the times that we're living through now.

"It's a strange thing, you know what I mean?" added Richards. "But it's just something that happens between Mick and me without us having to really think about it.

"Mick had come up with a song and we recorded it over a year ago, I think last February in LA. It's sort of eerie when suddenly it's coming to life, I mean the ghost comes to life."

The Rolling Stones' last album of original material came all the way back in 2005, with A Bigger Bang. They released an album of blues covers, Blue & Lonesome, in 2016.