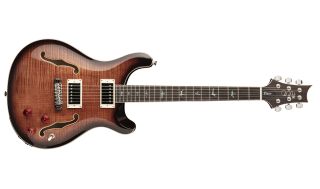 The first piezo-equipped guitar in the company's SE Series, the Hollowbody II Piezo is built with a maple top and back with mahogany sides. The guitar features an ebony fretboard, with 22 frets, a 25" scale length and PRS' trademark bird inlays.

Sonically, the guitar packs 58/15 “S” pickups and an LR Baggs/PRS Piezo system. These are controlled by two volume knobs - magnetics and piezo - and two output jacks - mix/piezo and magnetics.

Players can plug into the mix/piezo jack and use the individual volume controls to blend the pickups with the piezo’s acoustic tones. They are also afforded the option of plugging into the jacks separately, allowing the guitar to run its magnetic pickups into an amp while simultaneously running the piezo through an acoustic amp or DI into the soundboard.

The price and release date of the PRS SE Hollowbody II Piezo guitar have yet to be revealed as of press time.

For more info on the guitar, stop by prsguitars.com.