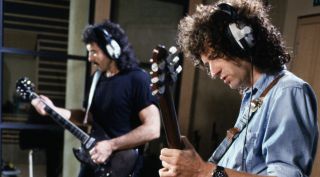 Queen guitarist Brian May and Black Sabbath riff-master Tony Iommi have been close friends for decades, and, for almost as long, the two have said that they'd love to collaborate with one another.

Though the two have performed onstage - most notably at the Freddie Mercury Tribute Concert in 1992 - and in the studio together - for the all-star Rock Aid Armenia cover of Deep Purple's "Smoke on the Water" - no music from the two guitar gods alone has seen the light of day, yet.

When asked in a recent interview if there was any chance of the long-rumored meeting-of-the-musical-spirits occurring though, May didn't exactly rain on the parade.

“I think there is a chance. We do more talking than anything else, but we do a lot of talking," May told Guitar World .

"He is really my dearest friend in the business and has been for so many years. I could write books about Tony because he’s just the most [pauses]... I don’t even know how to put it into words. You know, he’s a luminous human being is Tony, with a wonderful, kind nature and an incredibly baffling sense of humor.

Supergroups aren't always more than the sum of their parts but come on! It's hard not to root for hearing two of the all-time-greats join forces.