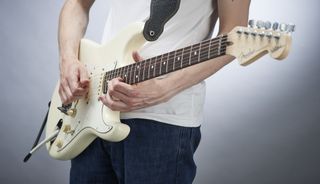 Noted for their versatility, suspended (or sus) chords are a welcome addition to any player’s repertoire. You can throw them into your arrangements to liven up any chord progression containing standard major or minor triads, or you can make them the center of a progression to lend it an overall airy ambience.

In this lesson, we’ll start with open-position voicings and move on to movable voicings, to give you a complete overview of these useful chords.

The two most commonly used suspended chords are the suspended 2nd (sus2) and the suspended 4th (sus4). Both of these are formed by removing the 3rd from the standard major (1–3–5) or minor (1–b3–5) triad and replacing it with a different degree of the scale.

Now that you have an understanding of the theory behind these chords, let’s play a few. Figure 1 is a listing of the most common open-position suspended voicings.

When playing through them, try committing their shapes to memory by relating them to the major and minor shapes you already know. (Since these chords are often used in conjunction with major, minor or dominant chords, fingerings may vary depending on your tonal center.)

Our first song example pays homage to one of the masters of the suspended chord, Led Zeppelin’s Jimmy Page. Much like Zeppelin’s “Tangerine,” Figure 2A uses both sus2 and sus4 chords to add color tones to an Am chord.

To perform the initial Am–Asus4–Am movement, keep the initial Am depressed while adding and releasing the 4th (D on the 2nd string) with your pinkie. Figure 2B is a simple three-chord figure based on Tom Petty’s “Free Fallin’.”

To execute the Dsus2 seen in both measures, use your 1st finger to fret the A on the 3rd string and your 3rd finger for the 2nd string’s D.

Similar to Def Leppard’s “Love Bites,” Figure 3 closes things out with some ambient open-chord shapes. Before attempting to play through the exercise as a whole, familiarize yourself with each voicing, making sure every note sustains clearly when struck. Then continue on with the arpeggiated picking patterns for each chord.

First, let’s take a look a the most commonly used movable suspending voicings, as shown in Figure 4. Solely for simplicity’s sake, we’ve listed them all in 5th position.

Chords rooted on the E string are shown to the left to the double bar, while those to the right are rooted on the A string. To get used to these voicings, try running each one up the neck chromatically, or one fret at a time, beginning at fret one.

Our first song-based example uses the wide-stretching sus2 voicings that open up each chord set in Figure 4. These shapes - often referred to as stacked power chords - flavor tunes like the Dave Matthew’s Band’s “Satellite,” Pantera’s “Floods" and the Police’s “Message in a Bottle,” which is outlined in Figure 5.

Figure 6, based on Van Halen’s “Panama,” features A-rooted sus4 chords. Use your 1st finger to fret the bottom note of the first E chord while barring across the next three strings (D, G and B) with your 3rd finger.

For the sus4 that follows, simply add the A note (10th fret, B string) with your pinkie. The two slash chords (B/E and A/D) are best fingered by barring across the fretboard with your 1st finger and using your 2nd finger to fret the note on the G string and your 3rd finger to fret the D-string note.

Figure 7, similar to ELO’s “Fire on High,” is a great workout for both hands, kicking off with a majestic B7sus4 that resolves to a Bm on beat two. Use your 2nd and 3rd fingers to fret the non-barred notes in both chords. Go slowly at first, employing alternate strumming (down-up, down-up, etc.) to navigate the quick rhythms.