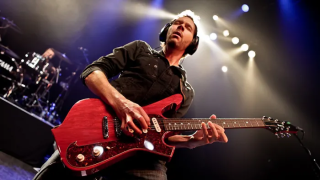 This interview and lesson was originally published in 2006.

In 1986, Racer X made their recording debut, Street Lethal, an album featuring the impossibly dexterous string-skipping and razor-sharp speed picking of guitarist Paul Gilbert. In a matter of months, the band’s chopsy, often humorous performances made them a sensation in Los Angeles clubs. The exposure eventually led to Gilbert’s pairing, in 1988, with former David Lee Roth bassist Billy Sheehan in Mr. Big. Over the next decade, the two balanced pop-rock songcraft with single-string feats of strength on songs like “Addicted to That Rush,” “Green-Tinted Sixties Mind” and the #1 single “To Be With You.”

Since leaving Mr. Big in 1998, Gilbert has waxed a handful of solo albums but oddly they’ve emphasized his vocals and roots-rock influences more than his guitar antics - even though he ranks right alongside Yngwie, Vai and Satch in the shred pantheon.

It’s only now, with his exciting new album, Get Out of My Yard, that he’s released an entirely instrumental record.

Why did he wait so long?

“I don’t really like instrumental guitar music,” Gilbert admits, “and I rarely listen to it. I liked ‘Satch Boogie’ and the instrumentals Rush did, but players who gave up on being in bands to focus on guitar didn’t interest me as a fan. I like my guitar players with singers: Eddie Van Halen with David Lee Roth, Randy Rhoads with Ozzy, Jimmy Page with Robert Plant. So when I became a solo artist, I wanted to be a singer, too - still have intense guitar, but in the context of a band.

“At the same time,” he continues, “because I am a guitar player, I have ideas that don’t necessarily fit the format of ‘vocal’ music. So I figured that, before I condemn all-instrumental guitar music, I should at least give it a try - see if I could make a record that not just guitar players but also regular rock fans would enjoy.””

The album’s title reflects Gilbert’s musical mindset: “Guitar players tend to be territorial and competitive. So it’s a bit of me wanting to claim my own piece of the art form - to yell at everybody else, in a tongue-in-cheek way, ‘Get out of my yard! I’m doing it my way!’”

Gilbert wastes no time making this statement, opening Get Out of My Yard with a blistering unaccompanied guitar solo. While this particular track might scare off those with a low tolerance for notes, the album as a whole is firmly rooted in rock - from roots to progressive, punk to metal - due largely to Gilbert’s writing process.

“Sometimes I’d think of a band and fantasize about joining it,” he says. “ ‘Full Tank,’ for instance, is almost like my audition song for the Black Crowes. I did the same thing with ‘Hurry Up,’ which is very influenced by Rush.”

Thanks to a rare hole in Gilbert’s schedule (he’s recently married, and spends much of his time in Japan, where he serves as honorary dean of the country’s eight Musicians Institute branches), we were able to rap with him about his new record, and even hit him up for a monster lesson. Read on for a feast of pick-melting, tendon-tearing moves, as well as some more nuanced approaches and even a few riff-writing concepts.

You’ve said that you made an all-instrumen­tal CD because you wanted to unveil “kick­ ass guitar licks no one has heard yet!” Can you walk us through some?

I could demonstrate “Get Out of My Yard,” using my friend Mike [Elsner] as the human capo. I’ve got three E strings [tuned in octaves, on the lower neck of his Ibanez custom double-neck] and a capo at the 8th fret, and I start with a C minor arpeg­gio with a tapped slide on top [FIGURE 1]. I kick in a delay after that, to loop it, and then I go into the moving-capo part.

I also used the three E-string idea for “Three Es for Edward,” which has a lot of open-string licks [FIGURE 2]. Arpeggios are easy with this tuning, but chords get pretty tough!

There’s also a ton of new stuff in “The Echo Song” [FIGURE 3]. The whole secret is the dotted-eighth-note setting on the delay, which I got from Pat Travers and Pat Thrall. I’m only playing 8th notes, but when you hit the delay, everything gets twice as fast.

That’s a cool effect. How about a few more never-before-heard licks?

Another new thing I did was build chords out of the harmonic minor scale, like in “The Curse of Castle Dragon” [FIGURE 4]. That’s A harmonic minor [A-B-C-D-E-F-G#], based in E.

That song also has some fast picking [FIGURE 5]. With most fast-picking stuff, you’re also moving your left hand in time with your right. This is half and half; the end is all picking, on one note.

There’s a new way to play arpeggios on that song too. Originally, I took an E5 power chord, played the notes separately, and harmonized it up the E minor pentatonic scale [FIGURE 6].

Then I applied that idea to an E minor triad, where I’m using only the notes E–G–B [FIGURE 7]. Once I’d done that with E minor, I tried it with major and diminished as well.

And people often confuse your string-skipping arpeggios for sweep picking.

With string skip­ping, it’s best to start simple - build up some licks where you go between neighboring strings, like this one in A minor [FIGURE 10A]. The trick is in the picking pattern, and the hammer-ons and pull-offs. Now I’ll use the same technique, but with a wider stretch, and skip some strings [FIGURE 10B]. The result is a nice, wide-sounding arpeggio.

How do you incorporate those techniques into triad arpeggios?

There’s a bunch, like these in E minor [FIGURES 11A–B], and this very difficult lick [FIGURE 12].

But just starting at the lowest note and going to the highest note isn’t the only thing you can do with arpeggios. I did a lot of exploring with E minor triads in relation to open strings, to play off how the guitar is tuned [FIGURE 13].

There are also a lot of string-skipping triad arpeggios in the Haydn Symphony [No. 88 Finale] I did on this album [FIGURE 14].

You also play some ferocious blues-rock licks on songs like “Hurry Up” and “Full Tank!" Are some of these new as well?

One of the blues licks I just learned - I can’t believe I didn’t know it all this time - involves bending a string and, while it’s bent, switching to the next string, which will be pre-bent, and bringing it back down [FIGURE 15]. I did something like that in “Hurry Up” [FIGURE 16]. It’s that “falling down’’ kind of sound, with­ out the whammy bar. “Hurry Up” is actually my favorite song on this album.

The main riff starts in the key of E, but then I transpose it up a minor 3rd, to G, for a more “open’’ sound [FIGURE 17]. On the album in general, I tried to do more open-string stuff, because that’s unique to the guitar.

You’re doing some incredibly fast picking at the end of “Full Tank!’ What’s happening there?

The whole trick is the slide with your pinkie, which puts you in position for the next lick. There’s a really basic speed-picking lick I do over and over in the breakdown of “Straight Though the Telephone Pole.” It’s almost like an exercise - and I apologize for that - but it’s still exciting [FIGURE 19]. That’s alternate picking, starting with a downstroke and heading up the E minor scale at three notes per string - one of the best ways to practice picking.