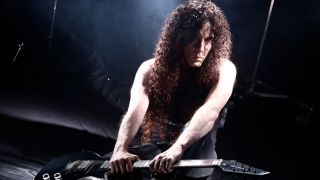 Metal legend and former Megadeth lead guitarist Marty Friedman remains an important source of inspiration for building unusual melodic twists and finding unique directions in music. As a player, Friedman has always combined self-expression with a fearless approach to the less-traveled areas of music and his instrument, entertaining and inspiring metal-minded musicians and fans since the 1980s. As a founding member of the shred-metal group Cacophony in the late ’80s, Friedman honed his chops alongside fellow six-string firebrand Jason Becker. Together, they raised the bar of the dual-guitar attack heard at the time and were commonly referred to as “the band with two Yngwies.”

While Cacophony failed to chart massive success, the band’s output was noticed and enthusiastically admired and embraced by shred-hungry guitarists the world over. The two rising stars each went on to release inspired solo albums, with Friedman’s Dragon’s Kiss and Becker’s Perpetual Burn both hitting the streets via Shrapnel Records in 1988. The records pushed the two guitarists’ names into the spotlight in the guitar community, but it was Becker teaming up with David Lee Roth (notably replacing Steve Vai) and Friedman joining the now legendary metal band Megadeth that propelled both players toward mainstream rock guitar stardom.

Friedman collaborated on arranging songs with Megadeth founder and frontman Dave Mustaine for his debut recording with the band, the landmark 1990 release Rust in Peace, which is still widely regarded as one of the finest metal albums ever. A large part of the respect for this recording comes from Friedman’s wicked fretwork and extended soloing throughout the LP’s now-classic tracks. Marquee songs like “Hanger 18,” “Holy Wars… The Punishment Due” and “Take No Prisoners” are celebrated album highlights, but for many fans, the most coveted diamond is “Tornado of Souls,” a song on which Friedman recorded one of the most inspired guitar solos of his career.

Through the 1990s, Friedman continued to pave a path of success with Megadeth and quickly became a regular on MTV with his excessive headbanging and fret burning. The guitarist embarked on numerous world tours with the band in support of subsequent albums, including the chart-toppers Countdown to Extinction (1992) and Youthanasia (1994). During this time, Friedman also managed to record and release a pair of inspired instrumental albums on Shrapnel Records, Scenes (1992) and Introduction (1994).

Friedman’s distinguished run with Megadeth came to an end by the year 2000, and in 2003 he moved to Japan, where the guitarist became remarkably famous. He has since appeared on more than 700 Japanese television programs and remains a popular and famous celebrity in the country. His musical output continues to evolve in new directions, including guest appearances with musicians from Japan and all over the world, not to mention additional solo material, including 2014’s Inferno and his most recent release, Wall of Sound (2017).

Analyzing Friedman’s approach to playing and music making is challenging, as his intuitive knack for combining breathtakingly acrobatic arpeggios, sinister string-bending motifs and a plethora of exotic scales in any given phrase produces a truly unique and inspiring sound. It’s Friedman’s signature single-note lead style and expressive articulation that make his playing demand attention, admiration and respect. This lesson will reveal some of the exotic scales that Friedman likes to use, and with practice, you’ll understand how this mix-and-match approach to combining various scales based off the same root note, or tonal center — a concept known as modal interchange — can push your own playing to new levels of inspiration.

To begin this exotic scale discovery, Ex. 1 illustrates the E Aeolian mode, also known as the E natural, or pure, minor scale (E F# G A B C D). This is a common scale heard in timeless rock and metal classics, such as “Crazy Train” by Ozzy Osbourne and “Fade to Black” by Metallica. As you play through this example, notice the emphasized E octave notes performed at the beginning. This root emphasis will help you accurately hear the overall key and tonality of the scale that you’re moving through in this and other examples in this lesson.

This type of comparison will reveal that we’ve changed only one note: The D has moved up a half step, to D#, which instantly provides the new exotic flavor and sound. The harmonic minor scale can be found in plenty of rock and metal music (in addition to classical and jazz) and is well-known for being a favorite with another famous metal guitarist, Yngwie Malmsteen. Also based on E harmonic minor, Ex. 4 presents a fluid legato phrase inspired by a number of licks Friedman has played and recorded over the years.

Returning to E Aeolian for a moment, we can transform it to another scale by taking its major second degree, F#, and lowering it a half-step to the minor second, or “b2,” F, creating the popular Phrygian mode. E Phrygian (E F G A B C D) has a very distinct and dark sound and can be found in centuries of Flamenco and Spanish guitar music, not to mention the output of an assortment of rock, metal, and jazz guitarists. Ex. 5 illustrates this scale in our established seventh-position template, again providing a clear and convenient comparison to both Aeolian and harmonic minor.

Ex. 6 offers a Friedman-style ascending melodic run based on E Phrygian and an insightful demonstration of how the guitarist might navigate through this scale melodically. Particularly noteworthy here are the intervallic skips employed — as opposed to just running the scale straight up or down — which create an interesting, rolling melodic contour, with lots of “peaks” and “valleys.” Take note, as well, of the extensive use of pull-offs, which give the run a gracefully smooth legato articulation. Learning a handful of exotic scales is one thing, but being able to craft expressive, appealing melodies with them is another matter, and this is something that Friedman excels at.

A slight alteration to the Phrygian mode gives us another exotic scale, the sinister-sounding Phrygian-dominant, which is the fifth mode of harmonic minor. To begin, return to E Phrygian and raise its minor, or “flat,” third, G, up a half-step to G#. This transforms the mode to the intriguingly brighter yet still dark-sounding E Phrygian-dominant (E F G# A B C D), illustrated in Ex 7. (This is the same set of seven notes that comprise the A harmonic minor scale — A B C D E F G# — the only difference here being that we’re now starting on the fifth of that scale, E, and thinking of that as our new root note, or tonal center.)

Ex. 8 is a variation on the Phrygian run from Ex. 6 and is intended to be used as a comparison between these two scales and the similar but distinctly different sounds they produce. It’s noteworthy how altering only one note like this can change the overall mood, flavor and character of a line.

We’re now going to take Phrygian-dominant and alter one of its notes to morph it into an even more exotic and otherworldly sounding scale. We’ll raise the minor, or “flatted,” seventh, D to the major seventh, D#, just as we had done earlier with E Aeolian to make it E harmonic minor, but now we have the major third, G#, in the mix, too. This mutation yields the mesmerizing E “gypsy” scale (E F G# A B C D#), a mode popularized in the United States in 1962 by surf-guitar legend Dick Dale with the instrumental hit “Miserlou,” which was his creative arrangement of an old Middle Eastern tune by the same name.

Ex. 9 illustrates the E “gypsy” scale played in our seventh-position template, and Ex. 10 demonstrates a characteristically flowing Friedman-style run based on the scale, played in a higher octave. Again, notice the liberal use of pull-offs, as well as a legato finger slide and a soulful half-step bend and vibrato at the end of the phrase. This type of precise and well-timed half-step-bend-and-vibrato move is a staple of Friedman’s soloing style, heard in many of his signature licks and famous solos.

We can create another interesting and spooky-sounding scale by returning to harmonic minor — intervallically spelled 1 2 b3 4 5 b6 7 —and raising its fourth degree a half step, to A#, in this case, making it the #4 (1 2 b3 #4 5 b6 7). This alteration produces what many call the Hungarian minor scale (in E: E F# G A# B C D#), an unusual and distinct tonality that Friedman likes to utilize and explore.

Ex. 11 illustrates the E Hungarian minor scale, using, for comparison, the same seventh-position template employed for all the previous scales presented in this lesson, and Ex. 12 offers a Friedman-style run built from E Hungarian minor.

This final example showcases the kind of highly expressive and lyrical string bends and pitch manipulations that are celebrated trademarks of Friedman’s unique lead playing style. Notice the series of precise half- and whole-step bends, or “scoops,” that effectively and beautifully outline the scale, in a way that is far more interesting than simply fretting the targeted notes conventionally.

I hope this lesson has given you some insight into the lead playing style of one of rock and metal guitar’s most celebrated innovators. As you can see and hear, presenting the scales in a parallel manner — all based on the same E root note — makes it easier to view, listen to and compare their slightly different structures and subtle differences in “flavor,” or “color.”