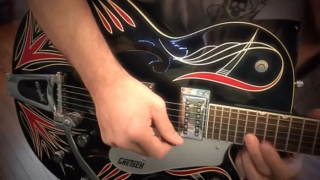 What guitar player hasn’t even taken part in a blues jam? If you’re reading this and saying, “Me,” then this lesson is for you.

We’re going to show you the chords and scales you need to navigate the 12-bar form, as well as some cool licks and turnarounds, so that the next time you’re at a jam session and your turn comes, you’ll be ready to tear it up.

THE 12-BAR FORM
The primary harmonic structure of the blues is the I-IV-V progression, which derived from church music of the South.

Unlike most tonal music, which uses dominant 7th chords (1–3–5–b7) as functional harmony, the blues uses them to add color, most commonly in a 12-bar form (FIGURE 1).

There are variations within the form, the most common being the quick change, where the IV7 chord sits in for the I7 in measure 2. Another typical substitution involves playing the IV7 chord in measures 1–2 and the I7 chord in measures 3–4. The final bars of the 12-bar form constitute the turnaround, named as such because it sends you back to the beginning of the form for another chorus.

In the minor variation of the 12-bar blues, minor 7th chords are substituted for the I7 and IV7 chords. Minor blues also has a different turnaround—bVI7–V7-im7-V7 (in the key of Gm, that would be Eb7–D7–Gm7–D7)—which can be heard in B.B. King’s “The Thrill Is Gone.”

One of the key rhythmic ingredients of the blues is the shuffle feel, which is most easily described as eighth notes played not straight but in a “long-short” manner. Technically speaking a shuffle has a triplet feel. Each beat is divided into three parts (“one-and-uh, two-and-uh, three-and-uh,” etc.) rather than two (“one-and, two-and, three-and…”), so swing eighths are felt on the beat (1, 2, 3, etc.) and on the “uhs.”

FIGURE 2 outlines the I, IV and V chords as played in a shuffle. Use your fret-hand’s index finger on the root of each chord, your ring finger on the 5th and your pinkie on the 6th. As soon as you’re comfortable playing these shapes in rhythm, plug them into FIGURE 1’s 12-bar form.

In the Forties, Muddy Waters went electric, opening the blues to new possibilities. Thanks to amplification, it was no longer necessary to pound out a heavy shuffle to be heard over the din of a noisy juke joint. Waters and others, namely Buddy Guy and John Lee Hooker, began to use single-note motifs to navigate the I, IV and V chords (FIGURE 3).

There are contexts, however, such as a slow blues or a T-Bone Walker–style jazz-blues, where a shuffle or single-note pattern just won’t cut it. In such cases, fully voiced chords can be used to fill out an arrangement quite nicely.

FIGURE 4 contains basic dominant and minor shapes for the keys of G and G minor. Note the introduction of the D9 (V chord). By sliding the shape down two frets, the IV chord (C9) is formed. Likewise, the C7 shape can be slid up two frets to create a D7 chord.

The 7#9 chord, known as the Hendrix chord due to its prominent role in songs like “Purple Haze,” enhances the tension of a blues turnaround, as it contains clashing notes: both the natural 3rd and b3rd (or #9) (F# and F, respectively in a D7#9 chord). A 7#9 can be used for the V7 chord in any blues progression.

SCALES AND LICKS
The importance of the blues scale (1–b3–4–b5–5–b7) and its variations can’t be overstated. Whenever you hear a rock or metal guitar solo, there’s a good chance that it’s derived from this scale. In major keys, it’s common to include the natural 3rd—especially following the b3rd—when soloing over the I and V chorus.

FIGURE 5 shows the most basic blues-scale pattern, in the key of G.

Early masters approached this scale in a less intellectual way, often concentrating on the top three strings alone, as well as on the two extended patterns shown in FIGURES 6A–B.

Each of the zones illustrated in FIGURES 5–6 has what are called blue notes, which when used properly can generate high-soaring lines. These notes include the b5th (a half step above the 4th), and the microtones that are a quarter step above the b3rd and the b7th.

The empty circles in FIGURE 7 represent the blues scale’s most commonly bent notes, seen in action in the licks of FIGURES 8A–10B. Like any other guitar technique, string bending requires great subtlety and should be approached with diligence. Strive for accurate intonation, and keep in mind that a quarter-step bend requires merely a nudge of the string.

TURN THE LEAD AROUND
No blues form would be complete without a turnaround. Though the term is generally reserved for the last four bars of a blues, it may also be applied to a two-bar intro or ending figure. (You can use the last two bars of a 12-bar form as an intro.)

Falling into the middle range, FIGURE 12 is a Robert Jonson–style turnaround that lands you squarely back on the I chord.