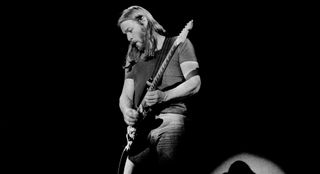 Of course, one of the best ways to learn more about guitar technique is by watching a master - like David Gilmour, for instance - at work.

You can also learn a lot though, by hearing someone attempt to emulate a master, and fail miserably.

Such is the conceit of YouTuber The-Art-of-Guitar's new video, in which he demonstrates a flawless version of David Gilmour's stunning solo on Pink Floyd's 1979 classic, "Mother," before playing it again, terribly, with a number of technical mistakes.

Even if you're not a massive Gilmour or Floyd fan, learning about the technical no-nos presented here will help you avoid them like the plague in your future solos.

According to the video, the eight ways you can mess up the pristine solo are by having weak finger rolls, not leaving space, forgetting the slides, no vibrato, not using string raking, skipping hammer ons and pull offs, under-bending or over-bending, and - of course - bending out-of-tune.

You can check all of them out in the video above.

For more on The-Art-of-Guitar, stop by his YouTube channel.