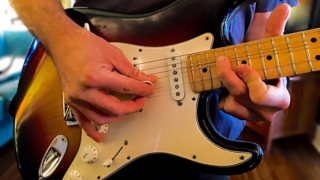 Carl Verheyen knows chops. Listen to his music and it’s instantly clear that he possesses them by the metric boatload. But he also knows how to get chops: how to study, practice, and think about guitar to maximize your learning and ultimately, your enjoyment of the instrument. Here are some of his thoughts. Take heed.

I’ve never been into exercises. I don’t believe in practicing anything that can’t be used on stage or in the studio. To my way of thinking, exercises are studying to become a musician, whereas practicing your lines is being a musician. Having said that, there are a few things I do after a long flight or a day away from the guitar.

The first one is a right-hand rhythm exercise that incorporates any scale you choose and a metronome. Let’s use F major, the one that starts on the 3 of the key since there are no stretches or position changes within the pattern [Ex. 1]. With the metronome set at 100 bpm, play two notes to the beat, or eighth-notes, ascending and descending. Make sure each note is crystal clear with no buzzes or fret noise. This is how you establish tone in your hands. Next, do the same with three notes for each beat (triplets). Play that rhythm until it’s clear as a bell before moving to four notes to the beat, or sixteenth-notes.

Now comes the exercise part [Ex. 2]: Start with eighth-notes and shift into triplets halfway up the scale pattern. Then jump to sixteenth-notes on the way back down. I shift between note values randomly, all the while keeping my time perfectly even.

It’s very important to listen to the sound your hands are making! Do you have the same tone and attack on the bottom three strings as you do on the top? Does your pick angle produce a scratchy sound on the lower strings? This is the time to correct those issues and solidify your groove. The more you do it, the more you realize that a lot of players don’t stay in the pocket when they double-time their licks. Don’t be one of those guys!

When I finished he said, “You mean play an F# on each string with two of them on the high string, ascending and descending?” I thought, “He’s got some serious ears!” Then he promptly nailed it faster than I had, and I was looking at the neck while doing it!

When I got home I made an exercise out of it, picking any note and playing it on all six strings, ascending and descending in order… blindfolded! Try it: Don’t look while you play a Bb on the sixth string, 6th fret. Then play the same note on the fifth string/1st fret, fourth string/8th fret, and so on. Do it with five or six different notes to calibrate your hands when you first pick up the guitar each day. You’ll own the fretboard and demolish any dark areas!

One of the most personal things we do on the guitar is bend notes and add vibrato. But it’s amazing how few of us have complete control over our vibrato. Most guitarists seem to have one speed they shake their strings with, and only occasionally does it relate to tempo and the emotion of the song. I also believe all four fingers should be able to bend a whole-step or a half-step at the very least. Try this:

On your second string, bend a Bb up to a C from the 11th fret, with whatever finger you choose. Make the bend quick and positive and nail the pitch of the C. Don’t add any vibrato.

Next, do the exact same bend and let it sit for a few seconds before adding a hint of slow vibrato, like the way Frank Sinatra sings. Make sure it’s slow and bluesy.

Now try that bend but with the intent that the vibrato is in motion at the exact moment you reach the C. Make it a little faster.

Try it real fast with a “hummingbird” vibrato or a wicked, wide, heavy metal/opera singer vibrato, but make sure it’s instant and not an afterthought once you’ve arrived at the note.

Now do all of that with your other three fingers.

I took some classical guitar lessons way back in the ’80s in an effort to get a nice tone on the nylon-string guitar without using a pick. The teacher had me grow my right-hand nails out, which seemed really awkward to me at the time. But, little by little, I began incorporating those fingers along with my pick when I played the electric, and before long it became a major part of everything I do.

Try [Ex.4], a fast, funk bluesy line in G7. I use it a half-step up in Ab for the bridge of my song “Closing Time Blues” and then harmonize it a third higher using the same technique. By using your pick for every note played on the fourth and fifth strings, and your middle and ring finger for all second-and third-string notes, you’ll get much cleaner and faster than any flatpicker alive.

Here’s a variation that is just one of the limitless possibilities with this kind of hybrid, cross-string picking [Ex. 5]. It’s the intro to a song of mine called “The Road Divides.” I’m using open strings to cover ground on the radical position changes.