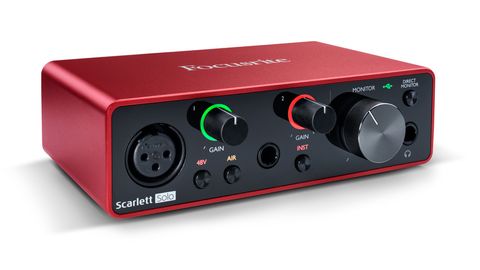 A great-sounding interface for guitarists that represents excellent value for money.

If you’ve done any recording in the past few decades, whether at home or in a big-time pro studio, you’ve probably had your signal processed and sweetened by Focusrite gear.

The company’s interfaces and mic pres are legendary, from the early consoles that the great Rupert Neve designed for producer George Martin to the mass-marketed units attainable by the rest of us. And oh, how attainable they have become. Behold the Scarlett Solo 3rd Gen, the latest incarnation of this well-loved USB audio interface range. This new unit features years of recording knowledge and tone in a package barely bigger or more expensive than an effect pedal.

The diminutive Scarlett Solo looks cute but is totally professional. Focusrite pretty much owns the device’s red anodized look, and it simply reeks of quality. Once you hook it up to your computer via USB and run balanced cables (an upgrade from the 2nd Gen’s RCA jacks) to your monitors, everything you’ll ever need is right there on the front panel.

The 1/4-inch input can be switched between instrument and line levels, and the wide-ranging gain knob insures that it can handle hot active pickups and weak vintage signals with aplomb. The XLR input sits to the left, portending all the Neve-esque goodness that we associate with Focusrite mic pres.

The front panel Air switch, offered for the first time in the Scarlett series, is designed to get the preamp even closer to the sweetly seductive sound and vibe of Focusrite’s holy grail ISA mic pre. In addition, you get switches for 48-volt phantom power, zero-latency direct monitoring and a headphone jack. It’s all simple, clean, and elegant.

I put the 1/4-inch input’s gain control to the test by tracking a Carvin Jason Becker guitar with high-output active pickups as well as an old Applause acoustic-electric with a rather anemic piezo, and I had no problems matching levels.

Tracking in Pro Tools as well as Cakewalk by Bandlab was a breeze, as it should be in this day and age. The bundled Focusrite EQ software is powerful and easy to use, and the direct monitor function made it simple to record with plug-in effects and listen in real time. Bravo!

Focusrite says that the Air feature is most noticeable when using top-quality mics, so I plugged in my Neumann TLM127 condenser and gave it a whirl. To my ears, the difference is subtle, but musical. It does something to make the mids speak a little more clearly, and I liked what it did to the miked-up tone of my Larrivée dreadnought.

To be fair, that mic on that guitar sounded pretty damn good anyway, but it’s definitely a plus to have the Air circuit at your disposal. And in the spirit of more is more, I put down one track with Air engaged, one without it, and one direct with the signal from the onboard Fishman Aura. The resulting sound was positively glorious.

When I think back to spending huge amounts of money on my first few recording interfaces, which offered nothing near this level of pro quality, I’m struck by how amazing the Scarlett Solo is. Unreal sound, zero latency, super-cool software and an elegant look for $109.

The unit is so portable that a bandmate of mine brings a Scarlett Solo to every gig as an interface between his keyboard and laptop, seamlessly accessing a ton of great sounds and features. No matter how complete your home studio or live rig is, it probably has a place for this.