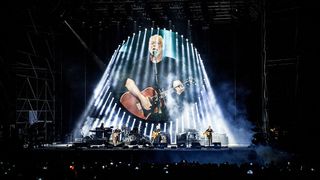 Together with Roger Waters’ ongoing penchant for sound effects, Gilmour’s toneful vocabulary forged Pink Floyd’s new sound, culminating in masterworks such as Ummagumma, Meddle, Atom Heart Mother, Dark Side Of The Moon, Animals, and The Wall, all released between 1969 and 1979.

It is this vast cache from which the following ten essential riffs have been gathered. Why? Well, Pink Floyd’s collective catalog is just too massive for candidacy—you can’t even name all of their albums in a top 20 list—and many consider this decade to be the band’s most fertile period. So, apologies to all whose favorites were excluded, but these are the chosen ones.

Now, rev up your Stratocaster, Echoplex, and Hiwatt (or reasonable facsimiles) and get ready for an educational and fascinating journey through ten signature riffs that define the essence of Pink Floyd, one of the world’s greatest bands.

10 “Astronomy Domine” from Ummagumma (0:49-1:44). This heady excerpt’s doom-and-gloom intro riff contrasts a low-register Delta blues lick with an ominous E5/Eb polychord. The ingenious chord progression that ensues was penned by Barrett and epitomizes the band’s late-60s psychedelic era. Driven by a relentless eighth-note rhythm, a tonic E5 chord drops to Eb5, which in turn jumps to G5 and A5 (the IV chord) before temporarily resting on the E and Fmaj7#11/E voicings in bars 7 and 8. Follow the D.S. back to bars 4 and 5, and then skip to the rhythmically enhanced descending chromatic figure in the coda. Here, Gilmour’s octaves cover the 5 of each chord and the optional parenthesized bassline provides the root. Add dotted-whole-note D and D# chords to complete the cycle.

9 “Echoes” from Meddle (19:56-20:24). Culled from a 23-minute opus that displays the band’s refinement en route to the landmark Dark Side Of The Moon, the chords and chromatic bass runs that outline this excerpt’s spooky Im7-bVI7 progression (C#m7-A7) have been condensed from three separate Gilmour overdubs. Alternate between the bass note and upper chord voices for two beats, strum the entire chord on beat three, and then play chromatically descending or ascending bass notes into the root of the next chord. More chromaticism occurs following the relative major E chord as we climb through arpeggiated B and C chords to reapproach the tonic C#m7.

8 “In The Flesh?” (or “In The Flesh”) from The Wall (0:17 - 1:13). Gilmour and company approach total heaviosity with this classic intro riff, which again combines gothic and blues elements within its opening four bars. Ascending parallel major triads played over a static D pedal tone—another Pink Floyd hallmark—make an appearance in bars 5 and 6, and provide the segue to the harmonized two-bar melody in bars 7 and 8. These major- and minor-tenth harmonies outline the chords notated in parentheses.

7 “Run Like Hell” from The Wall (0:22 - 0:55). Gilmour’s majestic delay-drenched major triads pierce the upper register over a rhythmic D pedal tone that recurs throughout The Wall. The delay time and blend is crucial to both guitar parts. Set yours to play back four repeats starting a dotted-eighth note—or three sixteenth notes—later, dial in a 50/50 blend of wet and dry signals, and bask in it.

6 “Another Brick In The Wall, Pt. 1” from The Wall (1:38 - 1:48). Both of the riffs illustrated in this excerpt broke new textural ground for guitarists. The first system isolates Gilmour’s palm-muted eighth-sixteenth-sixteenth accompaniment (Gtr. 1/Rhy. Fig. 1)—which utilizes the timed delay from “Run Like Hell” at a slightly slower tempo—and presents two optional variations to drop into beat four of the figure. The spacey guitar overdubs in the second system float over Rhy. Fig. 1 as well as the stereo spectrum. Gtrs. 2 and 3 are effected with the same delay settings as Gtr. 1, causing each part to overlap the previous one until both guitars join in unison for a brief stab outside of the established D minor tonality.

5 “Another Brick In The Wall, Pt. 2” from The Wall (0:01 - 0:53). Gilmour’s extensive use of triads reveals an awareness of chord/scale relationships. His verse figure employs a pair of alternating two-bar rhythm figures (bars 1 and 2) played with a single tonic Dm voicing. The pre-chorus in the fourth ending jumps to the IV chord (G) before Gilmour unleashes the funky, syncopated diatonic triads in bar 4. The chorus hook is underscored by robust F and C voicings and recapped with the opening Dm figure. You can’t shake the feeling that there’s a blues progression buried somewhere deep within.

4 “Another Brick In The Wall, Pt. 2” from The Wall (2:09 - 2:20). Our list wouldn’t be comprehensive without a few Gilmour solo moments. This four-bar excerpt is played over a stripped-down version of the verse groove. Gilmour’s tone—probably eminating from his Strat’s neck pickup—is milky sweet, and his phrasing is equally mercurial. Lock into the tenth-position D blues box for the pickup and stay there for the next three-and-a-half measures. The muscular two-step bend at the end of bar 2 works best with a reinforced three-finger bending technique. Halfway through bar 4, Gilmour introduces the 9 (E) to his minor pentatonicisms via a raked index-finger slide into ninth position. Use your 2nd finger to slide back up the D string on beat four.

3 “Money” from Dark Side Of The Moon (3:05 - 3:13). The call-and-response blues lickery in Gilmour’s opening guitar solo (the song features three distinctive solo choruses, each with a different tone) displays an unshakable confidence and deep-rooted understanding of the genre. An air-guitar staple, this seventh-position B.B. King-style phrase is sparse (in fact, the combined chordal and chromatic single-note rhythm figure played by Gtrs. 2 and 3 is much busier) but Gilmour plays it with enough Herculean authority and soulful vibrato to convince you that it’s the greatest thing you’ve ever heard. (Notice that he left the 7/4 soloing to saxophonist Dick Parry!)

2 “Comfortably Numb” from The Wall (2:04 - 2:21). What can you say? The opening riff of this soul-drenched solo has sent chills up more collective spines than one could possibly count. Simply put, Gilmour’s stratospheric tone is to die for; the kind of tone that can make men cry. And you can actually hear the chord changes in his lines. From the opening raked arpeggio to the descending string of triplets in bar 4, those notes combined with those rhythms and that tone create one of rock’s most magical moments.

1 “Money” from Dark Side Of The Moon (0:12 - 1:21). Between the rhythmic cash register loop, infectious shuffle groove, vibey Wurlitzer piano, and triple-layered guitar parts, it all came together for Pink Floyd on this landmark 1973 track. Best of all, this was the first rock song to seduce top-40 audiences into dancing in 7/4. Gilmour’s signature riff snakes across the second position laced with subliminal ghost harmonics and open-string passing tones that enhance its funky character. The guitar overdubs enter at 0:26, where Gtr. 2’s Bm7 chord chops reinforce the backbeats and Gtr. 3’s open B5 voicing slices through every other measure with razor-edged tremolo. The actual verse progression doesn’t begin until the fifth repeat of bars 1 and 2, so the 8/4 Vm (F#m7) and 6/4 IVm (Em) figures in bars 3 and 4 reveal a 12-bar blues form lurking within this masterwork. Follow the D.C. indicator back to bar 1 and end at the fine sign to complete the progression. Now, let’s do it again!