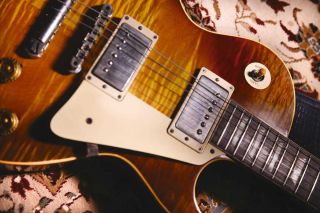 When Ed King passed away in August 2018, the Lynyrd Skynyrd guitarist left more than classic songs like “Sweet Home Alabama” and “Saturday Night Special” as his legacy. “Ed had a beautiful collection of instruments,” Isbell says. “He didn’t just get good vintage guitars - he got the best versions of pretty much everything.”

Over the holidays that year, Christie Carter of Carter Vintage Guitars in Nashville called Isbell to see if he would play some of the late guitar-slinger’s collection for the shop’s YouTube channel. Isbell worked his way through the ’73 Strat that King used on “Sweet Home Alabama” and a parcel of gold-top Les Pauls before spying the 1959 Les Paul nicknamed Red Eye on a stand.

Isbell wasn’t sure it was the real one. King and Gibson had collaborated on a Collector’s Choice edition, and he had multiple versions. But Carter confirmed it was indeed the real deal, which was famously stolen from King at gunpoint in 1987 and remained at large until he recovered it a decade later.

“I never thought I would need a ’Burst,” Isbell says. “I mean, nobody needs a ’Burst, but I never thought that I would want one, as expensive as they are. I’ve got a ’61 [Gibson ES-] 335 that’s just incredible, and I’ve never heard a Les Paul that could beat it.”

By his own account, this one did. “I couldn’t think about anything else,” he says. “I got lost on the way home from the store. I bought a bottle of water, and when I got home, I still hadn’t opened it. I couldn’t sleep that night.”

Isbell asked his manager to find a way for him to afford it without taking gigs away from his band or pulling him away from home for too long. He played a lot of gigs he normally wouldn’t take, from birthday parties to other private engagements. “I met some interesting people and went to some parts of the Hamptons that I’ve not been to before,” he says.

Although he’s made a few changes to preserve the original hardware, including replacing the tuners and tailpiece with retrofits, the guitar is largely intact from the moment it was made. He thinks the pickup covers may be New Old Stock, and it’s rumored King had a partial refret up to the 12th fret, but the pickups and wiring harness are from February 1959.

Isbell started 2019 with Red Eye in his hands and jokes that producer Dave Cobb called him to play so often last year, he figured he was hiring the guitar more than him. “I knew it was going to be a big guitar year.”