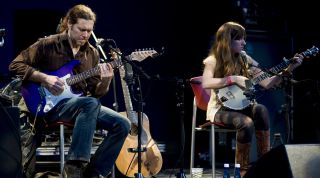 “Shanti and I were married for seven years before she sang in front of me,” says Curran, “but after I gave her a banjo for her birthday in 2005, she opened up. We isolated ourselves amidst the rugged natural beauty of coastal Maine, and focused inwardly, honing our musical craft through extended improvisation.

“Besides singing, Shanti provides the rhythmic backbone of our live performances, playing guitar, banjo, ukulele, and banjimer— a hybrid banjo dulcimer. This gives me the freedom to float over the top, create space, and manipulate time. Shanti’s singing is the primary influence on my playing, and I’m always attempting to conjure beautiful vocal-like sounds from the guitar, relying on finger vibrato, wide and microtonal bends, and sometimes a slide to get sustain. When playing slide, I don’t dampen the strings, so there’s a complex mix of overtones in the sound.

“I also use an Ebow to get sustain—often combining it with slide. However, using an Ebow on a Stratocaster in DADGAD tuning with three Texas Special pickups can be like riding a wild horse, because the strong magnets can affect the Ebow’s dynamic response in unpredictable ways. I take full advantage of the Strat’s three pickups, the 5-way switch, and the volume and tone controls, constantly changing settings to create different tones and textures. I also vary my picking attack and hand positioning a lot—whether using a flat pick or my fingers and nails. I play through a Vox Cambridge 15 amp, and also use an old Pro Co Rat and a Line 6 Verbzilla pedal.

“My acoustic is a ‘Butterfly’ guitar with a red spruce top and Indian rosewood back and sides that I built in 2006. It was inspired by the Stefan Sobell Model 1 prototype that Martin Simpson was playing when I used to take lessons from him, and which he dubbed the Butterfly because of its unique shape. I eventually bought that very Sobell guitar in 2006, and used it on our debut album.

“Martin was also a catalyst for my use of alternate tunings. The low, open tunings we use on guitar, banjo, and the other instruments resonate and ring with overtones, which helps us create the surreal atmospheres that form the foundations of our songs. In those tunings the way the notes interact triggers counterpoint melodies and other musical ideas—especially when Shanti is playing chords, because she fingerpicks individual notes rather than strumming, which also has a big influence on our sound.”