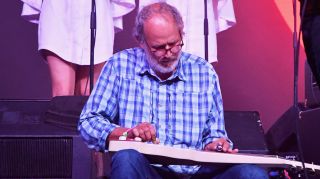 Bucky Baxter, a veteran guitarist and multi-instrumentalist who performed with Bob Dylan, Steve Earle, Ben Folds and many more, has died at the age of 65, according to his son, Rayland.

â€śHe is my everything and now he is an angel," Rayland wrote. "My heart is broken yet I am blinded by joy." No cause of death was revealed.

Baxter was most well-known for his time with Bob Dylan. He served as a guitarist and versatile multi-instrumentalist in Dylan's live band from 1992 - 1999, and played acoustic guitar and pedal steel on Dylan's critically-acclaimed, Grammy-winning 1997 album, Time Out of Mind.

Baxter also co-founded Americana legend Steve Earle's backing band, The Dukes, and played on a number of Earle's formative albums in the late '80s and early '90s, including his hit 1988 record, Copperhead Road.

Over the course of his long career, Baxter also performed with Ben Folds and Joe Henry, and lent pedal steel to R.E.M.'s 1988 track, "World Leader Pretend."

His only solo album, Most Likely, No Problem, was released in 1999.