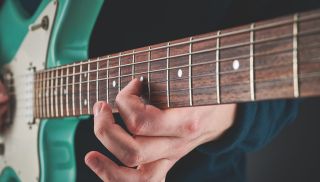 This is a classic GP lesson column from session guitar veteran Carl Verheyen.

As a self-taught guitarist, I never had the formal music-school training that many of today’s younger players experience.

That was okay - I learned from records, guitar lessons and, most importantly, by sitting in the front row at clubs and watching. All this informal training was great, except for a major deficiency in one important area: sight-reading music.

Of course, in order to compete with professional session guitarists in a highly competitive scene, I had to teach myself how to read. It was hard - especially when I would be alone in a room with a metronome and a black-and-white page full of sixteenth-notes.

I eventually came to the realization that every time I screwed up a bar, I would stop to figure out why, and the act of stopping was detrimental to training my eyes to keep moving. Here are three things I learned in order to keep my eyes on the page and my fingers moving.

1. Always read a key signature in the position where a scale pattern occurs with no stretches or position changes

If the piece is in the key of G, read in the second position or the seventh position. In both of those positions, you have a naturally occurring scale pattern starting from the root or the third, respectively.

The notes will be “under your hands.” If you attempt a G major piece in the fifth position, you’ll need to change positions to make all the notes - which is cumbersome.

An added value of key-specific position reading is that if you encounter an accidental such as Ab or D#, you’ll know they are outside your familiar G-major scale pattern and usually a half-step away from the notes under your hands.

2. Remember, there are only so many rhythm patterns

It may seem like a lot, but in 95 percent of contemporary music there are just a handful of syncopated patterns that occur all the time.

Rock, funk, jazz, country, classical and pop music have stylistic rhythm clichés, and once you learn to recognize the most popular ones, they’ll become second nature.

Once in a while, you’ll see two sixteenth-notes with an eighth-rest between them, but, for the most part, that’s it! Learn to recognize these rhythms so that when you see them, it’s automatic, and your hands know what to do.

My best improvement didn’t occur until I started reading regularly with another player - well after my professional life had begun.

We’d be reading duets together, and I would invariably blow a bar half way down the page and stop, but my partner would keep going. I knew then that I needed to let it go - to realize that my mistake was history, and my immediate goal was to catch up and miss as little of the music as possible.

You can always go back and see what hung you up at the end of the piece.

Following these three tips will help you shed the mysteries of sight-reading on the guitar. It will be worthwhile study, as the number of doors open to you will grow tenfold when you can read music well.