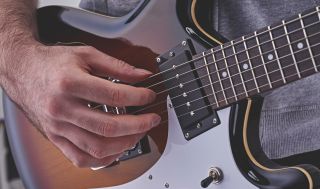 Looking to add some finesse to your rhythm playing? Wanna put some variety in your single-note soloing?

If your answer is yes to one or both of these questions, this training session on arpeggios, or broken chords, is just what you need.

Let’s begin by arpeggiating some basic open-chord shapes. FIGURE 1 presents a simple I-V-vi progression, which you may recognize from Lynyrd Skynyrd’s “Simple Man,” or the Scorpions' “Always Somewhere.”

To execute each arpeggio, keep the chord depressed while individually picking its notes and allowing them to ring freely for the duration of the chord.

Take note of the upstroke and downstroke symbols between the staves, which instruct you to economy-pick each arpeggio - that is, to pick with a downstroke for consecutive notes when moving from low to high strings, and vice versa - rather than alternate pick.

Make sure you can cleanly execute each note before you graduate to the indicated tempo of 104 beats per minute.

The closed-position arpeggios in FIGURE 2, which are similar to those in Coldplay’s “Clocks,” nicely contrast FIGURE 1’s open-chord voicings. Once again, let each note ring for the duration of its chord shape.

FIGURE 3 consists of two barre chords and one open chord; all three are flavored with tasty 2nds.

The major 2nd (C#) on the “and” of beat 3 is best fingered by removing the 2nd finger from the basic B-minor shape while maintaining the 1st-finger barre across the 2nd fret.

The figure closes with a pull-off from A (the 2nd) to the open G string (the root), a move best executed by fretting the 3rd-string A with your 1st finger, while keeping your 2nd, 3rd and 4th fingers depressed on the 6th, 2nd and 1st strings, respectively.

Now let’s work with some single-note lines. FIGURE 4 - similar to the main riffs in Roy Orbison’s “Pretty Woman” and Devo’s “Whip It” - opens with an arpeggio that outlines an E7 chord (E G# B D).

Here, you should sound each note discretely rather than sustain them, as in previous examples. In the second bar, though, let the notes of the open power chords ring.

The arpeggio pattern in FIGURE 5 recalls such classics as the Eagles’ “Hotel California,” Dire Straits “Sultans of Swing” and Metallica’s “Ride the Lightning.” Not surprisingly, all the notes in this figure come directly from the triads indicated by the chord symbols: Am (A C E), G (G B D) and F (F A C).

In each half measure, use your 4th finger to fret the first note, your 1st finger for the second and fourth notes, and your 2nd finger for the third note.