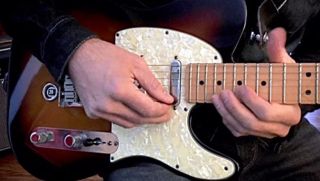 In this lesson, we'll provide you with some hot techniques that'll add flash and sass to your playing.

You’ll learn how to play and use double-stops, pedal-steel bends, open-string licks and banjo rolls. And along the way you’ll pick up 18 wild licks that you can use to spice up your guitar work, whether you play country or rock.

So grab your guitar, and let’s get down to work!

Let’s start out with some flashy double-stop patterns. The first one [FIGURE 1] involves a pair of dyads on the B and G strings, articulated with the middle and ring fingers. Interspersed with single notes, the figure outlines the tones of an E7 chord (E-G#-B-D).

Next, we have a chicken-pickin’ example [FIGURE 2]. Harmonized from G Mixolydian (G-A-B-C-D-E-F) on strings 1–2 and 2–3, the double-stops here are answered with ghost-string-muted attacks on the 3rd and 4th strings.

FIGURES 3A–B use 6ths har­monized from the D Mixolydian mode (D­ E-F#-G-A-B-C) and the C major scale (C­D-E-F-G-A-B), respectively. Take your time with these, and closely follow the hybrid-pick­ing instructions written below the staff.

Country pickers love to emulate the sweet, soulful strains of the pedal-steel guitar. Doing so requires strong fingers, as well as a good ear for holding notes to pitch. FIGURES 4A–D  present some typical pedal-steel bends. In each figure, make sure you hold the fixed string stationary while you bend the other to pitch. One could argue that this technique requires more mind control than it does finger strength.

FIGURE 5 offers a real-world example of pedal-­steel bends over a I-bVII-IV ballad in the key of E.

FIGURE 6 features a typical ending lick for a country ballad in the key of C. By far the most ambitious move in today’s installment, this one requires you to keep the strings parallel while you bend them to pitch.

One of the unwritten commandments in country is “Thou shalt play open strings wher­ever possible.” This refers not only to chords but also to riffs, licks and fills as well.

FIGURE 7 is a sparkly open-string riff in which half-step bends from C# to D are answered by open-4th-string attacks. This figure works well as an intro or a fill, but try it on other strings as well (G# bent to A on the 6th string, say, followed by the open 5th string).

The lick in FIGURE 8 is a good capper for a solo; it features double pull­-offs to open strings, plus a pair of half-step fretted-note/open-string “rubs.”

Banjo rolls are an essential hot-country technique. The maneuver is inspired by the picking patterns and open­-string work employed by banjo players (think the Beverly Hillbillies theme song). Influenced by the great banjoist Earl Scruggs, FIGURE 10 is a three-string adjacent roll - which, in fact, most rolls are - outlining a G chord. You’ll hear Albert Lee playing a similar figure in his barn-burning “Country Boy’’ solo. Use the hybrid-picking directions and let all the notes ring together.

FIGURE 11 is another three-string roll, this time on the top three strings. A trio of triple stops sets off the roll, and the figure culminates in a hybrid-picked sweep down the top four strings.

The long example in FIGURE 12 consists of a repeating four-string roll. Concentrate on the first measure until you can nail the picking pattern - which, as you’ll notice, stays constant throughout the example. Slight fret-hand variations from measure to measure line up with the chord tones of the changes, which spell out a I-V-I-IV progression in the key of A.