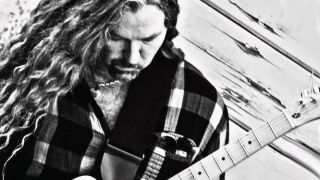 Listening to Michael Lee Firkins’ highly expressive and thoughtfully structured blues-rock guitar playing is exciting. Firkins is admired for his seemingly effortless way of creating melodies and musical moods, emotions and textures that hit you the moment you hear them.

He’s always had one foot firmly rooted in rock and the other in blues, yet his eclectic style reveals an affinity for other genres as well, such as jazz, fusion, funk, country and bluegrass. His creative musical ideas, refined playing techniques and broad range of influences have helped him forge a highly appealing and instantly recognizable style.

While Firkins may not be a household name, the release of his self-titled debut album on Mike Varney’s Shrapnel Records back in 1990 quickly caught the attention of his peers and fans of great guitar playing. Arriving at the peak of the neoclassical shred guitar trend, Firkins was a breath of fresh musical air.

Firkins went on to record two more albums for Shrapnel in the mid ’90s, Chapter Eleven and Cactus Cruz, and created an informative and inspiring instructional video for Hot Licks in 1992 titled Mastering Lead Guitar. This highly acclaimed tutorial work offered viewers fascinating insights into his unusual and individualized playing style, which simultaneously inspired and baffled many viewers.

In the years since he arrived on the rock guitar scene, Firkins has worked with a wide variety of artists. In addition to forming a jam-oriented side project called the Howling Iguanas in the mid ’90s, he’s played with Pat Travers, Steve Hunter and Neil Zaza.

In 2001, Firkins collaborated with shred guitar legend Jason Becker and performed the guitar parts on Becker’s highly acclaimed 2001 release Perspective. That project led him to work with Becker again on the latter’s 2018 release, Triumphant Hearts.

In addition to the various collaborations, side projects and session appearances he’s racked up over the years, Firkins has continued to release additional solo material, including the 2013 album Yep, which features legendary rock pianist-keyboardist Chuck Leavell, and bassist Andy Hess and drummer Matt Abts, both from Gov’t Mule. Firkins is currently at work on a new solo album, which is slated for a fall 2020 release.

Let’s begin by looking at one of Firkins’ signature playing techniques, in which he mimics the sound of a slide guitar without using a slide. Ex. 1a shows a phrase similar to one he offered in his Hot Licks video, played “straight,” without any faux-slide inflections.

Ex. 1b demonstrates how he would play the same phrase while dipping his guitar’s tremolo bar at just the right time to create an authentic, slippery-sounding slide guitar “sag.”

As indicated, this is done by picking the open B note on beat 3, depressing the bar to lower the note’s pitch by a half step (or closer to a whole step, if you prefer), picking the fretted G# note that follows, then releasing the bar. This creates the smooth sound of sliding down from the B note and up to the G#, which is a signature slide guitar move.

To further demonstrate how Firkins will masterfully apply this slide imitation concept, our next example presents a dual demonstration similar to the previous one, only here we’re taking an actual slide guitar phrase (Ex. 2a) and emulating its sound using tremolo bar pre-dips and releases (Ex. 2b).

Manipulating the bar in this way convincingly recreates the smooth glissandos into and away from notes, which is the hallmark of slide guitar phrasing, as well as licks you’d often hear played on a Dobro acoustic resonator guitar.

Harnessing refined tremolo-bar manipulations to evoke bluesy slide guitar phrases like this can be tricky at first and takes some practice to achieve fluency, but, as when playing with a slide, you’ll find it’s fairly easy to perform once you get the hang of it. Look for ways to apply the technique to your own licks and phrases.

Firkins also happens to be an accomplished slide player, and a great, tasteful example of his slide chops in action can be heard in the bluesy intro to the song “No More Angry Man (Part Two),” which he performed in open E tuning on his album Yep.

Ex. 3 presents a similar phrase. Firkins loves to play slippery-sounding blues-based licks like this. Once you have a feel for performing this phrase, return to standard tuning and strive to mimic the sound of it without a slide, using the whammy bar–driven, faux slide-emulation technique, mainly to see what you may discover with a little creative experimentation.

If your guitar isn’t equipped with a bar, try using your fret-hand fingers to slide into and off of notes, and add vibratos and string bends to manipulate the pitch and phrasing in similar ways. Incidentally, Firkins wrote this song nearly 20 years before he recorded it and before he developed his faux-slide technique.

Firkins will sometimes use his guitar’s tremolo bar to add subtle vibrato to a chord, which creates a breezy, “Hawaiian” pedal steel–like vibe. Inspired by the guitarist’s intro to “Dollar Blues,” from Cactus Cruz, Ex. 4 involves lightly shaking the bar on each held chord to create a dreamy sound and feel throughout the phrase.

Using the bar in this manner is a simple concept and technique, and offers an effective way to add expression to chord playing (think Stevie Ray Vaughan’s “Lenny”).

Using the bar in this manner is a simple concept and technique, and offers an effective way to add expression to chord playing (think Stevie Ray Vaughan’s “Lenny”).

“Saturday Night,” also from Cactus Cruz, offers another great example of Firkins’ tasteful whammy-bar manipulations, in this case within a riff. Ex. 5 recalls the tune’s melody, or “head,” where you’ll catch the guitarist expertly dipping his tremolo bar melodically during the first half of the phrase, followed by tasteful double-stop finger slides in bar 2.

Notice the angular F#m7 - B9 chord punches in bar 4, which demonstrate Firkins’ penchant for combining single notes with double-stops and partial chords in crafting his riffs and licks.

Another technique at which he excels, and one he loves to use often, is hybrid picking (using both the pick and bare fingers to pluck individual strings). A great example of this can be found in the swampy, blues-rock-style intro to “Car-less Sonata,” featured on his album Chapter Eleven and shown in Ex. 6.

This phrase serves as a great demonstration of how to tastefully use hybrid picking in a song riff or rhythm guitar part. Notice how Firkins adds a few subtle, quarter-step bends, or “curls,” on the lower strings in this E7-based phrase, in addition to the way he incorporates pull-offs and the open B and high E strings into the proceedings and smoothly transitions between using his pick and fingers to pluck the strings.

Watching him perform live is exciting and highly recommended, as the abundance of unorthodox melodic phrasing, blended with an assortment of unusual playing techniques, will continually fool your ear.

Ex. 7 is from the tune “Cactus Cruz,” a cut on the Michael Lee Firkins album, and features a dizzying A9-based phrase performed with hybrid picking in a grooving swing-16ths rhythm.

Notice how the crafty guitarist incorporates the use of his open B and high E strings in combination with notes fingered at the 7th, 8th and 9th frets to create a slinky, angular melodic contour, with a few hammer-ons, pull-offs and legato finger slides added to smooth out the phrasing.

Ex. 8 presents another cleverly crafted, hybrid-picked line and epitomizes a signature Firkins move, in which he alternates between pull-offs to an open string (in this case the high E) and legato finger slides on a lower string (ascending here on the B string).

As you move through this busy position-shifting hybrid-picked idea, notice that we’re connecting all five positions of the F# minor pentatonic scale (F#, A, B, C#, E) using the top two strings exclusively.

Speaking of “dizzy,” Ex. 9 offers a variation of the slinky hybrid-picked intro Firkins plays in his tune “Runaway Train,” from Michael Lee Firkins. Be sure to practice this example slowly at first and with careful attention to detail, such as palm muting the lower strings throughout while allowing the higher melody notes to ring clearly as they leap across the strings.

In terms of the fret hand, you’ll want to barre your index finger across the G and B strings during beats 2 and 3 of each measure. Also, take note of the position shifts that occur throughout the masterfully implied chord progression, which is conveyed by a flowing stream of hyperactive hybrid-picked arpeggios as this busy string-skipped phrase unfolds.

Notice the crafty use of hammer-ons, pull-offs and legato finger slides, as well as lots of fill-in-the-blanks chromatic passing tones. You can hear similarly blurry-sounding chromatic-based licks like this in the playing of rock and fusion giants like Jimmy Herring, Scott Henderson and Steve Lukather, but this busy lick shows Firkins blazing a melodic trail that jams within a single position and blurs the lines between blues, rock and fusion.

This tribute lesson merely scratches the surface of Michael Lee Firkins’ rich musicality and deep bag of appealing guitar licks, tricks and inventions. If you’re new to his name or his music, by all means take some time to check him out! There’s so much greatness and originality in his playing that it will surely inspire you to expand your own musical horizons.