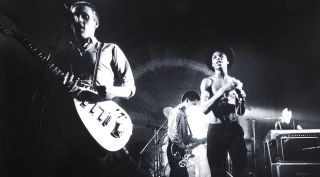 English Beat and General Public guitarist Dave Wakeling is best known for his hit “Save It for Later,” a bouncy, infectious skapop gem. The song’s tuning, D, A, D, A, A, D, or “Dad-Odd,” as he says, not only gave rise to the tune’s catchy riff, it also managed to stump a couple of Wakeling’s heroes, who are pretty good guitarists in their own right.

In this recently unearthed 2011 GP interview, Wakeling discussed the origins of the tuning, and how it flummoxed these two guitarists - two of the most acclaimed and commercially successful in rock history.

“The tuning was meant to be DADGAD but I screwed up,” he joked, “but it has a nice sort of Celtic poignancy, I think. Anyway, one day Pete Townshend phones me and says, ‘I’m sitting here with David Gilmour, and we’re having a bit of trouble finding your tuning for 'Save It for Later.'

"I think it was the most wonderful moment of my life as a guitar player. Those three-minute pop explosions of the Who were a big part of my early life. Then, a bit later, Ummagumma and records like that took over and the sounds of Pink Floyd were very important.

"So here are my two heroes, sitting around trying to learn my song and then calling me to ask about the tuning. So I said, ‘No. Work it out yourselves lads. There’s no shortcuts - ask Robert Johnson!’ But of course I willingly gave up the tuning.

"However, I’ve watched Pete very carefully on the Youtube and I think he’s still got DADGAD going - I don’t think he went for it. But he’s that clever that he can stretch four or six frets. It’s not many people who get to give a guitar lesson to Pete Townshend and David Gilmour, and how much sweeter that it’s somebody who can’t actually play the guitar?”