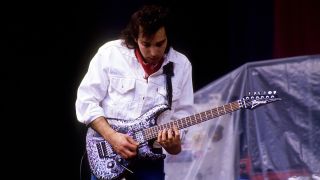 In a recent interview with Louder, in promotion of his new album, Shapeshifting, legendary six-string superstar Joe Satriani discussed some of the music that has most inspired him, while also giving insights into his own discography.

Notably, Satriani was asked about what he thinks is the worst record he's ever made - to which he gave a straightforward, honest answer.

"My first EP [Joe Satriani], back in '84," Satch said. "No bass, drums, keyboards. Just guitar, wrapping the pickups in foil and tapping them with an Allen wrench to get kick drum sounds.

"Some of the music’s sweet, and I love that it was avant-garde, but I have no idea why I thought people would want to hear that!"

Elsewhere in the interview, Satriani revealed that he considers many of his guitar heroes to be his friends, and "there’s an unwritten rule you don’t mention them." If he had to pick one guitar hero he isn't buddies with though, it would be the one and only Jimi Hendrix.

"He excelled in so many categories: the natural musical ability, the originality, the complete surrendering to their art. He was in the analogue world - razors and tape, no digital - and he just got it done."

To read the full interview, stop by Louder.