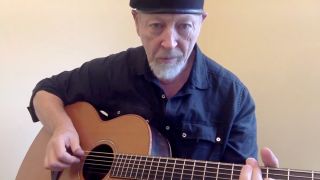 Get up close and personal with Fairport Convention legend and touring and recording guitarist Richard Thompson as he demonstrates his strumming, flat picking, fingerpicking, and hybrid picking techniques in one quick demo for Elixir® Strings. Watch as Thompson displays immense control as he gets a wide variety of sounds out of his guitar.

“Between my sweaty hands and a typical concert environment, even the best strings would deteriorate and lose top end in as little as 30 minutes. But then I tried Elixir Strings.

I love them for their tone, playability and that I can keep them on my guitar a really long time. Elixir Strings are the best out there.” - Richard Thompson

Elixir Strings allow guitarists to perform with more fluidity, greater comfort and less string noise. Elixir Strings are available in a variety of metals, coatings, and gauges. Check them out: elixirstrings.com/products.