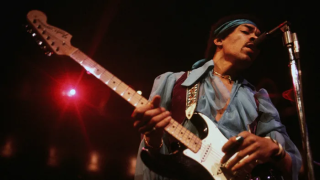 Before he morphed into a flamboyant Strat-wielding revolutionary, James Marshall Hendrix - a quiet cat from Seattle who backed artists like Little Richard, B.B. King and Ike and Tina Turner - worked under the stage name Jimmy James. Then, in 1966, at the height of the British Invasion, the guitarist moved to London, shed all his inhibitions and formed the Jimi Hendrix Experience. Combining R&B, funk, blues rock and psychedelia in a recording career that spanned just four years, Hendrix penned a handful of classics while he revolutionized electric guitar playing.

While studies in Hendrix’s guitar work typically focus on his lead work, in this lesson we’ll explore his inventive rhythm work, which comprised a multifaceted mix of open-string and thumb voicings, double-stops, chord partials and other techniques that, together, were part of his unique sound and style.

Much of Hendrix’s rhythm playing was derived from funk. In fact, there’s a booty-shaking chord shape so synonymous with the guitarist that it’s been dubbed the Hendrix chord.

One possible voicing of it, shown in FIGURE 1, rears its head at the outset of “Foxey Lady,” where, against low F# (fretted by the 1st finger), the 4th finger bars the notes E and A at the 5th fret, implying what is actually an F#m7 chord (F#-A-C#-E).

The true Hendrix chord, meanwhile, can be heard in the F#7#9 of “Foxey Lady”’s chorus, the E7#9 of “Purple Haze” and the C#7#9 of “Spanish Castle Magic” (FIGURE 2). These 7#9 voicings differ from FIGURE 1’s in that they include a major 3rd, which creates tension against the minor 3rd (enharmonically, the #9). Hendrix sometimes enhanced these chords with Dunlop Rotovibe and Univibe effects, wah-wah and Leslie, often to psychedelic effect.

Single-note riffs appear throughout Hendrix’s funk playing, in songs like “If 6 Was 9,” “Voodoo Child,” “Gypsy Eyes” and “Freedom.” These riffs involved tricky syncopations articulated with muting, slurs, trills and bends.

The riff in FIGURE 3 demonstrates a couple of these techniques within the A minor pentatonic scale (A C D E G). For the proper wah-wah effect, rock your foot back and forth on each beat.

The riff in FIGURE 4 - drawn from the A blues scale (A C D Eb E G) - is reminiscent of “If 6 Was 9.” Here, as you aggressively smack the bottom three strings with your pick hand, use your fret hand to dampen the strings marked with Xs, allowing only the specified single notes to ring out.

Hendrix often exploited open strings in his rhythm work. In songs like “Hear My Train a Comin’,” “Hey Joe” and “Voodoo Child,” the guitarist used double-stops, trills, slides and other embellishments amidst open-string drones.

In FIGURE 5, much of the single-note content stems from the E minor pentatonic scale (E G A B D).

In FIGURE 6, a triple-stop (B-D-G#) implies an E7 chord (E-G#-B-D) and open-string grace notes are used to embellish an open E chord.

Hendrix’s open-string ingenuity also involved shifting sixths along strings 3 and 5 while muting the 4th string and allowing the other strings to ring. Hendrix used this device between vocal phrases in “Voodoo Child” in conjunction with pitches from the E Mixolydian mode (E F# G# A B C# D), thus etching out an E7 chord (FIGURE 8).

Hendrix’s unusually large hands allowed him to play uncommon chord formations. For one, he was able to flip his fret-hand thumb over the top of his Stratocaster’s neck to anchor down root notes while his remaining fingers fleshed out colorful chord sounds.

In “The Wind Cries Mary,” for instance, instead of a standard six-string G barre chord, Hendrix played a G triad (G-B-D) on string set 2–4, with his thumb anchoring the 3rd-fret G. This freed up his pinkie to add notes on the 2nd string, such as the 5th-fret E that forms a G6 chord (G-B-D-E) in FIGURE 9.

Further, by using his thumb to grab notes on the 6th string, Hendrix could beef up the sound of his patented sus2 shapes, as heard in the intro to “Castles Made of Sand,” which informs FIGURE 10.

This thumb fretting aided a host of other Hendrix trademarks, such as hammer-on and pull-off embellishments played one diatonic scale step higher than a triad’s tones. For instance, in FIGURE 11, the notes tacked onto the underlying C chord (C-E-G) fall either a half or whole step above each chord tone - all within the C major scale (C D E F G A B).

In FIGURE 12, similar activity occurs within an Am shape (A-C-E) via the notes from the A hexatonic minor scale (A B C D E G), which is essentially the A minor pentatonic scale with an added 2nd (B).

In these double-stops, a higher note typically rang throughout, while a hammered-on embellishment occurred on the lower string. Also, the extra notes often fell in the vicinity of garden-variety chord shapes, with the thumb fretting any 6th-string roots. FIGURE 15 shows how Hendrix added the sus4 (suspended 4th; here, an F note in a C chord) to a major chord.

FIGURE 16 illustrates the same rhythm fill modified to fit an Am chord.

Obviously, the more pentatonic-derived fills you memorize, the more effectively you’ll improvise in this style. How many different G major pentatonic (G A B D E) double-stop fills can you play near a 10th-fret G chord shape? What about E minor pentatonic fills near a 7th-fret Em chord?

FIGURES 17–18 provide some possibilities. Note their pacing: When Hendrix outlined a progression with these moves, he’d often play a root on the downbeat, followed by a chord partial, and then deliver a fill in later beats. This not only left space for vocal phrases but also helped fill out unaccompanied passages, such as the “Little Wing” intro.

FIGURE 19 demonstrates this approach with a C–G–Am–Em progression.

In FIGURE 20, trickier linear moves - pentatonic fills played in horizontal rather than vertical fashion - are conveyed in a C–Am progression.