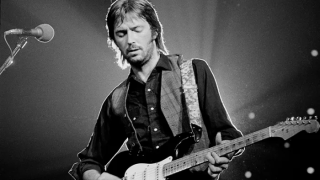 There’s a circa-1968 interview video clip with Eric Clapton in which he reveals a great deal about his guitar style.

Sitting in front of a wall of miscellaneous amps, and cradling his legendary 1964 “Fool” Gibson SG (the one with the psychedelic paint job), Clapton says something about himself that’s true of every player, whether they admit it or not.

He illustrates the point saying by slowly picking out a few tart pentatonic lines, then comments, “All these runs are put together from old phrases that I first started on, and now they’re just all mixed up with other things I learned.”

Like so many of us, Clapton started out as an imitator. He devoted years of practice and study to assimilate the sound and spirit of the bluesmen he idolized. And by taking these “old phrases,” treating them to subtle variations and combining them in new ways, he eventually became, arguably, the greatest Chicago blues player to come from somewhere other than Chicago.

From there, he went on to define what we now know as rock lead guitar, but he didn’t do that by altering the way he played. Instead, he just picked different musical backdrops for his electric blues excursions. In truth, Clapton’s approach to the guitar has hardly changed since the beginning of his career. Many of his favorite licks back in the Sixties remain his favorite licks today.

Here, we present 10 examples of those licks to absorb and apply in your own style.

Clapton had already gone a long way toward mastering the blues by the time he joined the Yardbirds in 1963. FIGURE 1, similar to a lick from that band’s “Got to Hurry,” follows a classic blues formula, orienting itself around a repeated base pitch (A), which alternates with higher notes that form a gradually ascending sequence (from C to E).

This base-pitch concept is taken several steps further in FIGURE 2, inspired by the opening salvo of Clapton’s solo on John Mayall’s “Have You Heard,” from the epochal 1966 Blues Breakers with Eric Clapton album. Although there’s more than one note to be found here, the clear focal point is the 2nd-string C, hit over and over with unbridled ferocity in a start-and-stop style borrowed from Freddie King.

(By contrast with Figure 1, the vibrato in this example should be ultra fast.)

Speaking of Kings, the patented B.B. King slide from one note to the same note on an adjacent string (in this case from the 3rd-fret/1st-string G to the 8th-fret/2nd-string G) is a highlight of FIGURE 3, along with some hammered-on double-stops and the kind of slippery position shifts that have become a Slowhand specialty.

FIGURE 3
(Note how bar 1’s slide into the G is preceded by the bend into the D—same basic idea but executed differently.)

More-central Clapton traits can be found in FIGURE 4, which owes a fair amount to Fresh Cream’s “Sweet Wine.” The example starts with a handful of soaring upward bends, indulges in some arrogantly clipped phrasing, then repeats a three-note line three times. Each repetition of the line should sound different from the one before because the position of the pick changes every time, creating new pinch harmonics.

FIGURE 4
(For the closing harmonics, place your pick hand’s thumb near the pick edge and move closer to the bridge for each repeat.)

Major 7ths are not normally thought of as bluesy, but that’s never stopped Clapton from using them, as FIGURE 5 demonstrates. Far from sounding weird, those two F# passing tones over a G blues progression are crucial to the lick’s success.

(The speed at which this lick flies by helps conceal that it’s actually two identical licks linked by a four-note bridge.)

Similarly, the key to FIGURE 6 is a string of unambiguous major 3rds (C# in A) in the last two measures. Because the 3rds are played as part of a staggered swing-style rhythm pattern (dotted eighth note alternating with a 16th), they don’t come off as stodgy. Preceding them with a round of raw double-stops adds further credibility.

(Hammered-on double-stops are a major feature here and an indication of Clapton’s fondness for primal rock and roll.)

FIGURE 7, inspired by the evergreen solos on “Crossroads,” from Cream’s Wheels of Fire album, opens with a classic minor pentatonic pull-off fest, then shifts gears in the second measure with a quicksilver line leading down to the final A.

(The stutter-step descending line in measure 2 is a tip of the hat to Slowhand’s hero Buddy Guy.)

Of course, not all of Clapton’s playing is so overtly aggressive. Check out FIGURE 8, which shows off his more relaxed side. Part of what makes this figure (reminiscent of Cream tunes like “I Feel Free” and “White Room”) so memorable is the use of 6ths (C# in the key of E) and 9ths (F# in E). Though they’re far from unusual note choices, they're also not the notes you’d automatically think of emphasizing based on the chord progression.

FIGURE 8
(Behold a Clapton standby: two eighth-note triplets, each incorporating a pre-bend followed by a pull-off.)

(Watch the position shift in bar 2. In preparation, you may want to switch from your 3rd finger to your 1st on that last A.)

Over the years, Clapton has shown that he can work comfortably in a wide variety of musical contexts without compromising the basic elements of his style. FIGURE 10, much like Cream’s “Badge,” is a good example of this. Though the chords are jangly pop, the lead line is all blues: a high drawn-out bend that touches on both the 4th and the major 3rd, a pair of fluid hammer-on/pull-offs, and a quick closing dip down from F# to A (a 6th interval). It all goes to show that even at his most mainstream, Clapton has never lost his connection to the spirit of his Chicago idols.

FIGURE 10
(The first six notes here are the product of a single pick stroke. Crank your amp’s gain for the requisite sustain.)