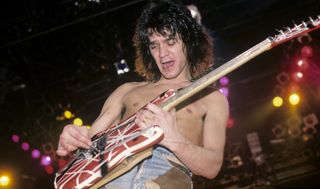 The following is a classic lesson from the GP archives.

It’s well established that Eddie Van Halen is one of rock guitar’s most influential and imitated lead guitarists.

But what’s often ignored is that he is also one of the genre’s greatest rhythm stylists.

For that reason, we’re going to look at the many facets of Eddie’s riff-based approach to rhythm.

One of Eddie’s rhythmic hallmarks is that he has rarely made power chords the focal point of his riffs. Instead, he opts for triads and suspended chords.

This pedal-point effect - the result of chords moving against a single, droning bass note [Figure 1] - created dramatic modal fluctuations in early VH cuts like “Runnin’ with the Devil,” courtesy of triads from both E major and E minor (as opposed to a single key center).

Eddie often explored suspended chords in conjunction with pedal-point riffs [Figure 2], as in “Dance the Night Away.” Note that in contrast to rock’s ubiquitous power chord, the three-note chords in both of these figures sound pretty terrible when played with an oversaturated tone.

More than 40 years after the release of Van Halen, the opening riff in “Ain’t Talkin’ ’Bout Love” - an arpeggiated Am-F-G5 passage played with palm-muted downstrokes - is still a favorite among beginning and intermediate pickers.

Figure 3 illustrates a similar riff. Note, however, that “Ain’t Talkin’ ’Bout Love” is one of the few purely arpeggiated signature riffs in the Van Halen discography. Eddie has tended to reserve this technique for short accompaniment segments like the one in “5150.”

Try playing Figure 4 with economy picking: that is, use a single stroke to tackle notes on adjacent strings, as indicated.

Dominant 9th chords figure prominently in Van Halen’s early rhythm work. As with the previously discussed triads, these more complex chords sound like crap when played with too much distortion.

On Van Halen’s first album, Eddie used E9 [E-G#-B-D-F#, Figure 5] - one of the least metal-sounding harmonies in existence - as the ending chord for “You Really Got Me,” “I’m the One” and “Ice Cream Man” The 9th chord is also the harmonic basis for one of Van Halen’s first original hits, “Jamie’s Cryin’.”

In the Seventies, stateside hard-rock acts like Aerosmith, Kiss and Ted Nugent played tunes heavily rooted in blues and boogie riffs. As fans of blues-based rock acts like Led Zeppelin and Cream, Van Halen certainly weren’t immune to this influence.

One thing that distinguished them, however, was the breakneck speed - tempos often reached a blazing 300 bpm - at which they played such riffs, as evidence on Van Halen’s “I’m the One” and the Women and Children First track “Loss of Control,” both of which are hinted at in Figures 7 and 8, respectively, as well as 1984’s “Hot for Teacher.”

Beyond Van Halen’s fastest figures, some of Eddie’s trickiest rhythm moves involve pairing fretted notes with chord partials on higher strings, as heard in the intro to “Panama.” Similarly, in Figure 9, chord fragments are stated over a repeated 5th-string E.

In other instances, Eddie’s fret-hand thumb anchors a 6th-string root while double-stops dart in and out [Figure 10], as heard in “Light Up the Sky.” Meanwhile, other exotic offerings like the reggae-flavored “Push Comes to Shove,” combine all of the above elements.

Michael Anthony’s minimalist bass style - for the most part root notes played in steady eighths - leaves plenty of sonic space for Eddie to experiment with.

When the spirit moves him, the guitarist might insert a pick scrape, dive bomb or dramatic 6th-string slide punctuated with fierce vibrato - all demonstrated in Figures 11A–C (measures 1–3, respectively). (Note: For the dive bomb in Figure 11B, sound the 6th string with a “flick” of your fret-hand thumb then gradually depress the bar.)

As for other effects, Eddie unveiled his unique palm-swept harmonics on Van Halen II’s “You’re No Good” and “Somebody Get Me a Doctor.”

To pull off this tasty technique, first lightly touch the strings near the bridge with the blade-side edge of your pick-hand palm. Then, as you repeatedly perform pull-offs on the 3rd string, move your pick hand back and forth between the bridge and neck pickup to stimulate random artificial harmonics (Figure 12).

Eddie also created rhythmic fills by squeezing natural harmonics between available air pockets in his riffs, in a melodic fashion, as heard in songs like 5150’s “Good Enough.” See Figure 13 for an example of this technique.

With the release of Fair Warning in 1981, Eddie staked more new territory with his use of drop-D tuning (low to high, D A D G B E) in a hard-rock context.

Years later, the influence of drop-D cuts like “Unchained” and “Dirty Movies,” approximated in Figures 14–15, respectively, as well as “Sinners Swing,” would be felt in songs like Ozzy Osbourne’s “No More Tears,” Alice in Chains’ “Would?” and Rage Against the Machine’s “Killing in the Name.”

Shortly before the release of Diver Down, Eddie acquired a miniature Les Paul designed by Dave Petschulat.

This ax inspired the signature fingerstyle riff of “Little Guitars’ [similar to Figure 16] - a passage Ed picked with his index and middle fingers. Each double-stop sounds staccato, or shortened, as the fingers are replanted on the strings immediately after each pick.

In later years, a number of notable fingerstyle riffs followed, including the verse riff of “Hot for Teacher,” which inspired Figure 17, and the quasi-country-rock plucking of OU812’s “Finish What Ya Started, which informs Figure 18.