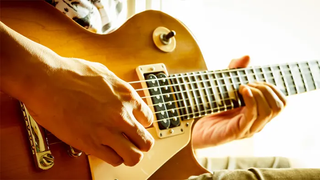 Why should you bother to learn other guitarists’ licks? What could you possibly gain from it? Shouldn’t you just work at creating your own?

The fact is, unless someone is a great songwriter or freakishly innovative on their instrument, they’ll most likely feel uncomfortable outside of the tiny box they call their “style.” Who wants that?

If one of your purposes for picking up the guitar in the first place was to have an instrument to communicate with, you’re going to need to spend time learning the languages—the appropriate scale types, rhythms, motifs, tones and so on—of the styles that you dig. Why? Because the more phrases you can play, the more you’ll be able to say, musically speaking. You’d certainly want to inform yourself about a given subject before talking about it at length, wouldn’t you?

Of course the process doesn’t end with being able to play a handful of cool-sounding phrases. You’ll also need to understand how to apply these licks in assorted contexts and keys, and how to string them together to create coherent solos.

But more importantly, you should listen to the music you like, just as much as you practice it. This will help you develop an intuitive sense of continuity in improvisation and composition.

Sound like a plan? Let’s lap up some licks.

Licks are memorable musical phrases that can be strung together to create a solo, fill in behind a vocal phrase or simply spruce up the end of a tune. In any form of music, some melodic ideas sound more at a home than others.

This is particularly true of blues, a style loosely based upon musical cliches that have survived generations. Whether you’re listening to Robert Johnson, Muddy Waters, T-Bone Walker, Buddy Guy, Eric Clapton or Stevie Ray Vaughan, it’s a given that you’ll hear plenty of melodic common ground.

Pentatonic licks are a key characteristic of authentic-sounding blues. As the E minor pentatonic (E G A B D) phrases in FIGURE 1A–B illustrate, blues licks are typically inflected with fret-hand pitch bends, fret-hand vibrato, and legato moves like hammer-ons and pull-offs.

Notice that both players favor callus-tearing index-finger bends and playing in pentatonic boxes comprising strings 1–3, with the root (A) on the 2nd string. However, there is a key difference in each King’s bluesy flavor: B.B. tends toward major-pentatonic sounds (1-2-3-5-6) while Albert often opts for minor pentatonic (1-b3-4-5-b7).

Two direct stylistic descendants of B.B. and Albert—a pair of pickers named Eric Clapton and Stevie Ray Vaughan—also did much to expand the vocabulary of electric blues. When Cream released Wheels of Fire in 1968, Clapton’s off-the-cuff solos blew most blues players away. Particularly humbling was Cream’s live rendition of Robert Johnson’s “Crossroads,” a cut overrun with jaw-dropping licks based upon minor/major pentatonic sounds, à la FIGURE 3.

Over a decade later, Stevie Ray Vaughan’s ferocious playing on Texas Flood—particularly his Albert King–inspired licks, à la FIGURE 4—provided the blues community with a similar shot in the arm. Note the use of the odd b2nd (F) in an otherwise E minor hexatonic line (E minor pentatonic with an added 2nd: E F# G A B D). Nice!

COUNTRY LICKS
In country music, there are tons of clichéd licks worthy of assimilating into your improv arsenal—phrases appropriate for either acoustic or electric guitar. Like blues licks, country licks use minor and major pentatonic sounds with Mixolydian shadings, like the classic open-position runs in FIGURES 5A–B, occurring in the key of G.

Double-stop licks are also commonplace in country music. These types of passages feature simultaneous-sounding note pairs—interval shapes like 3rds, 4ths and 6ths—often played with hybrid picking: plucking with the picking hand’s middle (“m”) and ring (“a”) fingers, while using a picked downstroke for single notes.

Meanwhile, FIGURE 7 illustrates double-stops with open-string pull-offs, an approach popularized by Tele master Albert Lee, a super picker who rose to prominence after playing with Emmylou Harris and Eric Clapton in the Seventies.

FIGURE 8 illustrates another Lee-inspired use of open strings, featuring 3rds (each note played one at a time) slid up strings 3 and 4, while pulling off to an open G.

Beyond single-note lines and double-stops, some of the most enjoyable types of country-fried licks result from copping the sounds of a pedal-steel guitar. This requires ample use of held bends—striking a note on a lower string, bending it to a particular pitch, then holding that bend while notes on higher strings are sounded. FIGURE 9 demonstrates this technique, a staple in the styles of ace pickers like Jerry Donahue, Brent Mason and Danny Gatton.

JAZZ LICKS
One of the most important aspects of proper jazz soloing lies in your ability to navigate ii-V-I changes (in C major: Dm7-G7-Cmaj7) with single-note phrases. Generally, these lines are heavily based upon arpeggios relating to the accompanying chords. To really get the gist of jazz, as with any style, you’re best served by studying the prime sources of the language. Who better to borrow from than bebop icon Charlie “Bird” Parker?

FIGURE 11 illustrates an elongated version of a ii-V-I, using a slightly more scalar approach. Jazzers also need to be equally adept at unloading ii-V-I lines suitable for minor keys (in A minor: Bm7b5–E7–Am7).

Hit the shed with FIGURES 12A–B.

ROCK LICKS
We could dedicate a dozen lessons to studying licks used regularly in the countless subcategories of rock. But at the core of solos that are truly rocking you’ll almost always find minor pentatonic “smear licks” stealing the show.

These repeating patterns—like those in FIGURES 13A–B, 14A–B and 15A–B—typically involve working between no more than a couple of strings and using bends and hammer-ons/pull-offs in manic fashion.

To glean the effectiveness of these licks you need only sample the output of classic rockers like Jimmy Page and Jimi Hendrix, southern rock revolutionaries like Gary Rossington and Duane Allman, hard rock innovators like Eddie Van Halen and Randy Rhoads, and metal heads like Zakk Wylde and Dimebag Darrell.

Add the occasional pentatonic sequence (FIGURE 16) and some range-maximizing legato slides (FIGURE 17) to your smear-licks arsenal, and you’ll be on the fast track toward ruling the roost in your own town’s rock scene. Good luck.